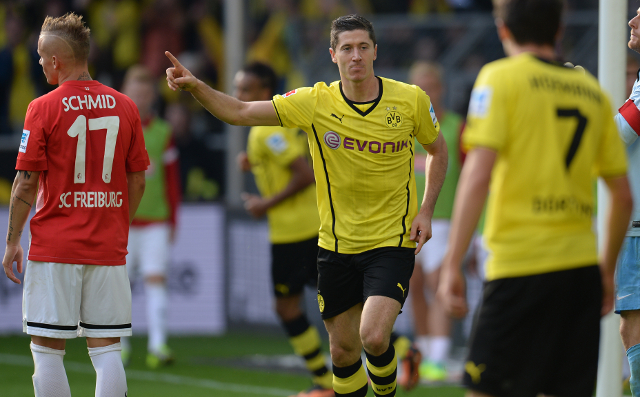 Premier League giants battle it out for in-demand Dortmund star.

Premier League giants Arsenal and Manchester City could be set to go head-to-head this January in an extraordinary attempt to hijack Robert Lewandowski’s move to Bayern Munich next summer, according to the Daily Mirror.

Both clubs are desperate to land the hugely talented Polish striker, who becomes a free agent at the end of the season and seems set on a move to Borussia Dortmund’s arch rivals at the Allianz Arena.

However, Arsenal and City will look to hijack a potential move when the transfer window opens for business in the middle of the season, and may be willing to pay big money for the 25-year-old even as his contract comes close to expiring.

Having smashed their club record transfer fee for Mesut Ozil in the summer, Arsenal are keen to continue spending and may offer as much as £25m for Lewandowski in an attempt to bring him to the Emirates Stadium this season.

Arsene Wenger’s side currently only have Olivier Giroud as their main senior striker, and are determined to bring in another player for that position after missing out on some high-profile targets in the summer.

City, meanwhile, are reportedly willing to offer Edin Dzeko to Dortmund as part of a swap deal for Lewandowski, in what could be an interesting transfer tussle this January.