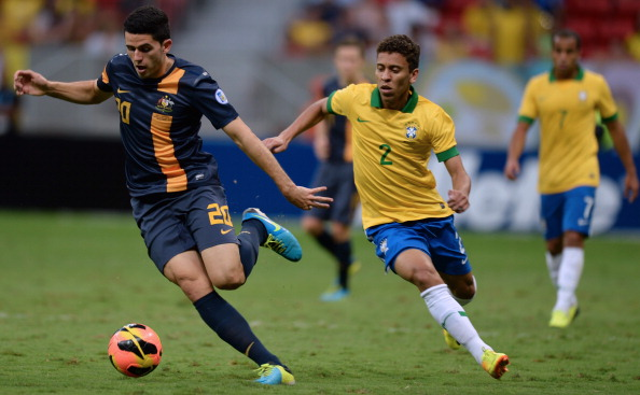 Arsenal keeping tabs on Atletico Mineiro defender as Sagna nears exit.Arsenal manager Arsene Wenger is weighing up a bid for impressive Atletico Mineiro right-back Marcos Rocha as he fears Bacary Sagna will not renew his contract at the Emirates Stadium, CaughtOffside understands.a

The French international defender has been with the Gunners since joining them from Auxerre in 2007, but looks set to move on at the end of the season as he has decided not to sign a contract extension with the club.

This will come as a big blow to Wenger as he faces the exit of an important and experienced player, but it has emerged that he is already making plans for Sagna’s replacement in that position.

Although the likes of Manchester City’s Micah Richards and Juventus’ Stephan Lichtsteiner have been linked as Arsenal’s main targets, it seems likely now that Wenger will look to bring in the slightly cheaper option of Rocha, with the little-known Brazilian full-back impressing immensely for Atletico Mineiro this season.

The 24-year-old, who has one cap for the Brazilian national team, has impressed a great deal as an attacking outlet for his club, scoring two goals and providing two assists in 22 appearances so far this term, and looks like a typical Arsenal-style player with his skill and technique.

Rocha has even filled in in midfield on occasion for Atletico and may be seen as an option in that area as well for the Gunners as they seek to add some depth to their relatively thin squad.

There may be some question marks over his defensive ability, which may be particularly highlighted if Rocha makes the step up to a more competitive league, which may echo Arsenal’s previous bad luck with another Brazilian full-back Andre Santos.

The left-back joined Arsenal from Fenerbahce in 2011 and proved a disappointment defensively, despite showing some promise going forward, and was sold by the club after just two seasons in north London.

However, Rocha looks a younger and fitter player than his fellow countryman, and could be available for as little as £5m, which will appeal to Arsenal as they look to avoid spending vast amounts of money in the transfer market.

Rocha himself could welcome the chance to move to a bigger club this season as he looks to put himself into serious contention for a place in the Brazilian national team at next summer’s World Cup, and a move to Europe would certainly go some way to showing that he is truly a top calibre player.

‘We need him to sign the contract’ – Atlético Mineiro president reveals what’s missing for them to announce their new manager Mar 4 2021, 22:22