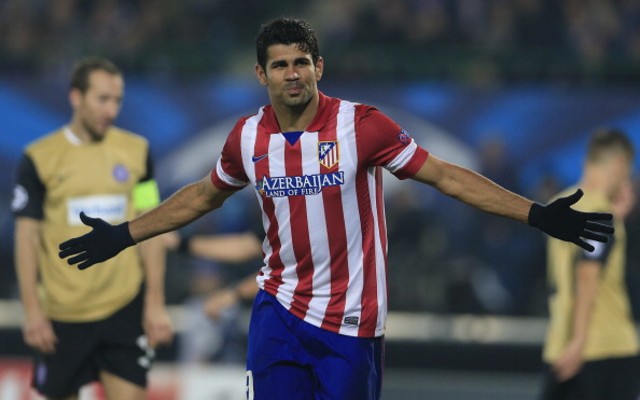 Stamford Bridge side hope to lure Brazilian away from the Vicente Calderon.

Chelsea’s ongoing pursuit of a fresh striking option has led Jose Mourinho back to Madrid where the former Bernabeu boss has targeted Atletico ace Diego Costa according to the Daily Mirror.

Mourinho has seen his current crop of strikers struggle for form, Fernando Torres, Andre Schurrle, Demba Ba and Samuel Eto’o managing just one Premier League goal between them thus far this season, but the Stamford Bridge manager has been told to fork out £35m if he wants to snap up Costa.

Atletico Madrid are well known for selling off their top talents in order to balance the books with the likes of Radamel Falcao, Sergio Aguero, Diego Forlan and David de Gea all being sold in recent seasons.

Mourinho had hoped to land Man United star Wayne Rooney over the summer but failed in his advances for the England man and has now turned his attentions to Costa.

The departure of Falcao to AS Monaco has given 25 year old Costa the space to grow and the former Real Valladolid has perhaps also benefited from the arrival of experienced Spanish international David Villa to the Vicente Calderon.

Costa managed a very healthy 20 goals from 36 starts in all competitions last season but has begun the current campaign in explosive fashion, netting a phenomenal ten goals in nine La Liga starts and also grabbed a brace for Atletico Madrid away in Vienna last night in Champions League action.