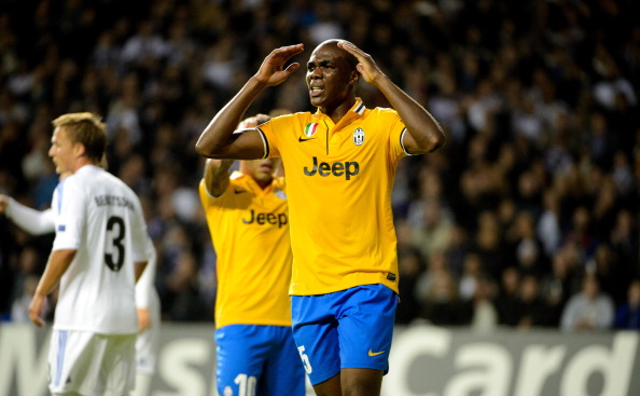 Check in to Juventus vs Genoa

Arsenal, Manchester United and Manchester City could all be in for Juventus defender Angelo Ogbonna this January after a difficult start to life at his new club, CaughtOffside understands.

The Nigerian-born Italian international became one of the most sought-after talents in Europe for some time after continued fine performances at his former club Torino for the last few years, before the Italian champions snapped him up this summer.

A strong and intelligent centre-back, Ogbonna was expected to be first choice for Antonio Conte’s side and help improve the team in their bid for a third consecutive Serie A title, though he has not managed to convince his new manager with his form, being in and out of the starting lineup so far this term.

This has now alerted three of the Premier League’s biggest clubs ahead of the January transfer window, as Arsenal, United and City feel the talented 25-year-old may become available for transfer or loan.

This situation largely resembles that of another new summer signing by Juventus, Fernando Llorente, who joined on a free transfer from La Liga outfit Athletic Bilbao, and who has also struggled to settle in at his new club.

This has led the likes of Tottenham and Chelsea to show some interest in signing the Spaniard, in what could now be a busy transfer window in Turin this winter.

Juve won’t want to give up on Ogbonna too quickly, but may be tempted if the right offer comes along from a top English team, as they won’t want to sell to Serie A rivals Inter Milan, who are also interested in making an offer after their recent big-money investment from Indonesian billionaire Erick Thohir.

All three of Arsenal, United and City have been linked strongly with several new central defenders ahead of this January, as all have struggled defensively at points this season.

Arsenal lack depth to their squad with only the out-of-form Thomas Vermaelen current available as an alternative to first-choice pairing Per Mertesacker and Laurent Koscielny, and despite their strong start to the season, Arsene Wenger’s side have struggled to keep clean sheets this term.

United, meanwhile, are keen to bring in a new long-term replacement for the ageing pair of Rio Ferdinand and Nemanja Vidic, both of whom have looked past their best this season as the Premier League champions have got off to a difficult start under new manager David Moyes.

City have been ravaged by injuries at the back, and would be keen to bring in a big name in that position after missing out on the likes of Pepe and Eliaquim Mangala during the summer.

All three sides have been linked with the likes of Adil Rami and Kurt Zouma, though they may now look to Ogbonna as a decent option as well, even if only on a loan deal for the remainder of the season, with a permanent move surely in the pipeline if the stopper performs well in the Premier League.