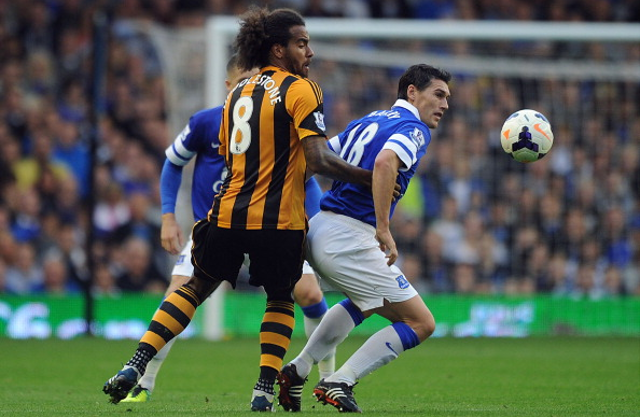 Everton manager Roberto Martinez says he is delighted with the performances of on-loan star Gareth Barry, though he is not currently thinking about keeping on a permanent deal, according to talkSPORT.

The 32-year-old midfielder moved to Goodison Park on a season-long loan deal from Manchester City on transfer deadline day, and has been a key performer for the Toffees since then.

Barry had not been at his best for City the previous season, leading to much speculation that he could be set to leave the club, though at the moment it is not clear if he will be remaining at Everton beyond this season.

Martinez insists he is patient on attempting to sign Barry and is simply hoping for the England international to keep his focus and continue his strong performances.

The Spanish manager, who took over at the Merseyside club from David Moyes this season, has also praised Barry for his influence on the team’s younger players, and says he is a great presence to have around.

“It is not the right time [to talk about a permanent transfer],” Martinez said.

“I wouldn’t put that in his mindset at the moment, all I want him to focus on is to keep enjoying his football and push for a start at the weekend and develop that competition behind the scenes – that is the only thing that matters at the moment.

“From the first day that he arrived he has been an incredible influence with the youngsters and an influence on the standards we have in training.

“Just with that alone you realise what a figure we have at the club. He is someone who breathes the game and brings the experience he has had from his career.

“He is playing with the desire and enthusiasm of an 18-year-old and has been a great player for us and I just want him to keep enjoying his football at Everton for as long as we can.”

Barry has previously played for Aston Villa, the club where he started his career, but found success during his time with Manchester City, winning the Premier League title in 2012.