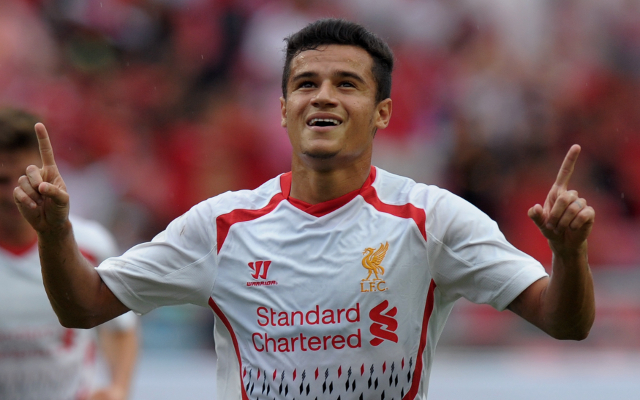 Reds have missed their diminutive forward in recent weeks.

Liverpool have received a huge boost with the news that Brazil playmaker Philippe Coutinho has returned to training after making a successful recovery from a recent shoulder injury, according to reports in the Daily Express.

The midfield player suffered the problem against Swansea City in a Premier League clash last month, although initially there were fears that Coutinho could be out of action until the end of November.

However, Reds head coach Brendan Rodgers has given the club’s fans a lift by confirming that the 21-year-old attacker is now approaching full fitness once again, although the Northern Irishman also said that Saturday afternoon’s Premier League encounter with West Bromwich Albion at Anfield has perhaps come just too soon for Coutinho.

Instead, though, Rodgers has pencilled his key forward in for a much anticipated comeback against Premier League leaders Arsenal at the Emirates a week on Sunday.

“He might just be short for this weekend,” Rodgers said in his pre-match press conference ahead of the visit of the Baggies this weekend.

“I think, after the weekend, he’ll be fine. He has got really good strength in his shoulder now, it’s just getting him up to speed in training and joining the group.

“He has re-joined training with the group. He’s been on the field doing a lot of physical work and he has joined in with the team on a non-contact basis.

“He has been in the last couple of days and has looked brilliant to be honest, like he has never been away with his flow and fluency with the ball.

“His work has been excellent. It’s great to see him back in and it’s another quality player back for us.

Coutinho has featured in only five matches in total so far for the Merseyside giants in all competitions this season, four of which came in the Premier League, contributing just the one assist along the way.