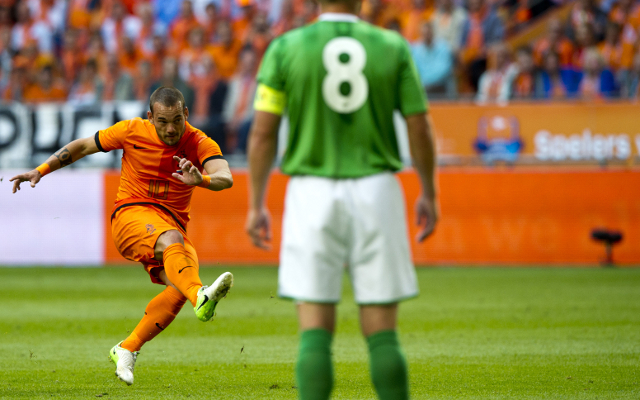 Manchester United are preparing to offer £12m to Galatasaray for the signing of Chelsea target Wesley Sneijder this January, according to turkish-football.com.

The Dutch playmaker only joined the Turkish giants in last year’s January transfer window, but a number of top clubs have continued to monitor him as his decision to leave Inter Milan for Galatasaray was seen as something of a surprise move.

Chelsea are believed to be the other main contenders for his signature, with Sneijder’s national team boss Louis van Gaal revealing that the Blues are interested in him and that he should take up their offer of moving to Stamford Bridge.

However, United are keen to sign a new creative midfielder of his type and may now step up their interest in bringing him to Old Trafford when the transfer window re-opens in January.

Manager David Moyes missed out on the likes of Cesc Fabregas and Ander Herrera during the summer and will be keen to bring in a player of Sneijder’s quality to act as a long-term replacement for Paul Scholes, who retired at the end of last season.

Galatasaray won’t want to lose a key player, but United are hopeful a £12m bid could be enough to prise the 29-year-old away from Turkey.