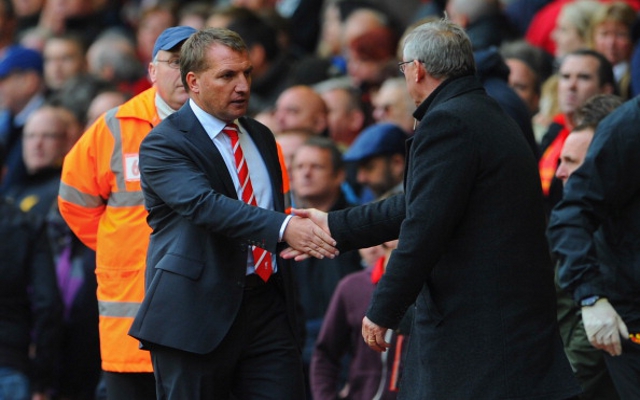 Irishman responds to Fergie’s midweek jibe by savaging the current Red Devils side.

Liverpool head coach Brendan Rodgers has hit back at recent claims made by former Manchester United manager Sir Alex Ferguson  in his newly released autobiography regarding the strength of the current side from Anfield, according to reports in the Daily Mail.

The legendary Scottish boss caused more than a few raised eyebrows this week when he stated in ‘Ferguson: My Autobiography’ that the Merseyside giants were still “eight players short of becoming genuine title contenders”.

However, the team that the Northern Irishman has assembled currently sit in third place in the Premier League, level on points with second-in-the-table Chelsea, and just two points behind leaders Arsenal after the opening eight games of the season.

And when asked to respond to the 71-year-old’s claims about the Reds in his book, Rodgers responded by saying: “That’s probably two short of what they need. We need eight, they need 10.”

Ferguson also stated in his book that he was “surprised” that Liverpool had taken the decision to replace previous coach Kenny Dalglish with someone so young and inexperienced as Rodgers, who was just 39 when he took on the role at Anfield in the summer of 2012.

Meanwhile, the ex-Red Devils trainer also wrote that current Liverpool skipper Steven Gerrard was not a “top, top player,” as whenever he had come up against United stars Roy Keane and Paul Scholes, the Englishman “seldom had a kick”.