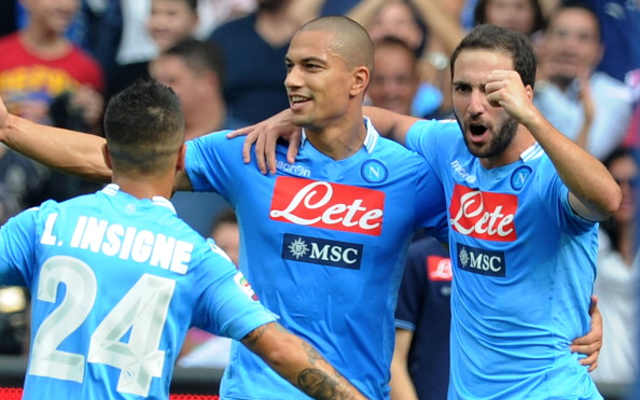 Arsenal to pursue former target after worries over lack of depth.

Arsenal manager Arsene Wenger is set to revive his interest in one of his former targets Gokhan Inler as he looks to add depth to his midfield this January, CaughtOffside understands.

The Gunners have made a great start to the season and currently sit top of the Premier League table, though Wenger is supposedly concerned about his side’s chances if summer signing Mathieu Flamini misses any significant spell of the season through injury.

The French battler was a surprise signing on a free transfer during pre-season as he joined Arsenal for a second spell, and has impressed with his performances in midfield.

However, the 29-year-old was sorely missed by Wenger’s side as they were undone by Borussia Dortmund in a 2-1 home defeat in the Champions League, which he sat out with concussion.

Flamini then limped off in Arsenal’s 2-0 win over Crystal Palace, and the Gunners noticeably lacked bite in midfield in his absence, with the likes of Mikel Arteta and Aaron Ramsey in slightly unfamiliar territory in deeper midfield roles for the team.

Arsenal previously targeted Inler during his time at Udinese, shortly after Flamini left Arsenal at the end of his first spell with the club in 2008, though a move for the Swiss international never materialised as Wenger preferred to nurture young players such as Abou Diaby and Alex Song for that defensive midfield role.

With Song then leaving to Barcelona last summer, Arsenal have been short in that position again, and Wenger will now make the most of the improved financial situation at the Emirates Stadium to bring in a new player to provide more depth for his side this January.

Arsenal have been linked strongly with Bayer Leverkusen’s Lars Bender in recent months, but it is now thought that the north London side will switch their attentions to the Napoli man, who may be available for slightly cheaper at around £17m, as opposed to the £20m asking price Leverkusen have set for their player.

Inler remains a key player for Rafael Benitez’s side, though they could be willing to move him on if they succeed in landing one of their main transfer targets this January, Barcelona’s Javier Mascherano.

Benitez is said to prefer a move for the Argentine enforcer, whom he enjoyed a highly successful spell with during their time at Liverpool, and Mascherano too could be keen on leaving the Nou Camp, where he is often played out of position as a centre-back.

Arsenal will certainly keep a close eye on the situation, and Inler definitely looks like an ideal signing for the team at this moment in time.