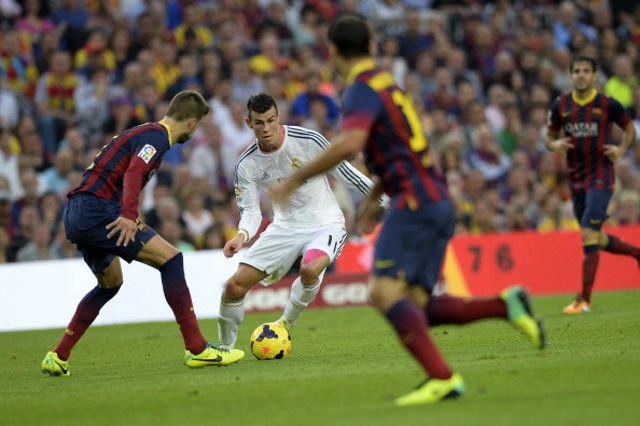 Flying Welshman has been suffering from both back and thigh injuries of late.

Real Madrid head coach Carlo Ancelotti gave his full backing to under-pressure wide man Gareth Bale after the Welshman’s underwhelming display in Saturday’s Clasico came in for much criticism in the Spanish press, according to reports on BBC Sport Online.

The winger was taking part in his first-ever match against arch-rivals FC Barcelona on Saturday afternoon, with the Catalans emerging as deserved 2-1 winners at Camp Nou.

And Bale, who only arrived at the Santiago Bernabeu in a world-record transfer worth a reported 100 million euros earlier this summer, surprisingly began the much-anticipated Liga clash as a central front man.

However, the pre-match plan by Ancelotti clearly did not work, with the Italian then deciding midway through the first half to switch Bale back to his more familiar position on the right wing, with Portugal international Cristiano Ronaldo then taking up a role up front.

But with los Blancos trailing in the match, Bale was then given the hook after half-time, to be replaced by French front man Karim Benzema.

Ancelotti, though, was quick to defend his star man after the full-time whistle, saying: “He played well and needs to look for his team-mates’ runs. He didn’t play badly during that hour.

“I think they are his first matches and he needs to get used to playing with his team-mates, which is normal.

“It doesn’t make much difference for him to play on the right or in the middle. We started like that to put more pressure on Sergio Busquets, but after 20 minutes I changed his position to the wing to give him more room.”

The crucial win for Barca keeps the Liga champions at the top of the table in Spain, and now with an imposing six-point advantage over their fierce rivals from Madrid after the opening ten matches of the new season.