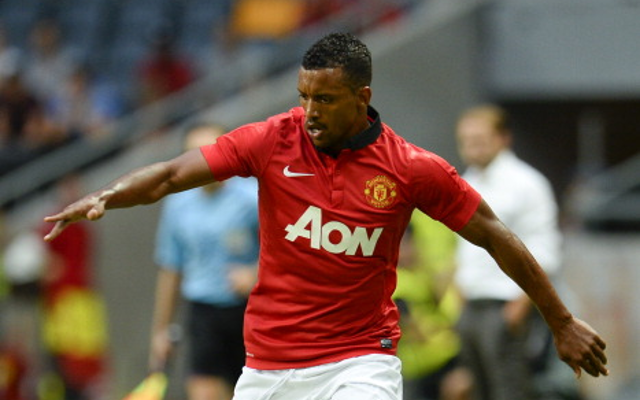 In-and-out Portugal international has been with the Red Devils for the past six years now.

Arsenal head coach Arsene Wenger is hoping to take advantage of the current uncertainly surrounding the future of out-of-sorts Manchester United wide man Luis Nani by luring the Portuguese to north London when the winter transfer window finally opens again for business in the new year.

The mercurial winger suffered the ignominy of being booed by his own fans when being substituted by new United manager David Moyes during Saturday afternoon’s come-from-behind 3-2 league win over Stoke City at Old Trafford.

Nani was given the hook by the Scot in the second half with the Premier League champions trailing 2-1 at that point to the Potters, only for the home side to then turn the match around following the Portugal international’s departure from the fray to win the contest thanks to two late headers from front men Wayne Rooney and substitute Javier Hernandez.

And it is now understood that Saturday’s limp showing on the wing by Nani was the final straw for Moyes, who had gone against his predecessor’s wishes by keeping hold of the player at the Theatre of Dreams last summer.

Previous Red Devils manager Sir Alex Ferguson had tried unsuccessfully on several occasions during the past few seasons to offload the inconsistent attacker, with the likes of former club Sporting Lisbon, AS Roma, Galatasaray and the Gunners all having been heavily linked with signing Nani in the past.

However, on every occasion that it appeared as though the player was set to finally leave the north west, a stumbling block would suddenly emerge to prevent a successful deal for Nani taking place, on most occasions involving the midfield player’s excessive wage demands.

Nani has been at United now since June 2007, when the Portuguese star first arrived at Old Trafford from Portuguese giants Sporting for a whopping transfer fee valued at 25.5 million euros, with the player originally agreeing a five-year contract with the club.

But it is fair to say that Nani has enjoyed an up-and-down career at United in the intervening seven seasons, during which time the wide man has managed to find the back of the net on 40 occasions in total in his 220 matches for the Premier League giants in all competitions, including 26 strikes in his 138 top-flight encounters for the club.

However, for every eye-catching performance from the winger came an equally disappointing display, with Nani’s inconsistency understood to have infuriated his former boss at the Theatre of Dreams, hence Fergie’s repeated attempts to sell the player.

The new man in charge at Old Trafford, though, actually took the opposite view to his fellow countryman after first arriving in the north west last summer, and even then rewarded Nani for his fine displays on the wing for United in preseason by handing the Portuguese a bumper new contract that now ties the player to the Red Devils until June 30 2018.

And yet it has now taken Nani all of four matches in total in this campaign to have changed the Scot’s mind, with Moyes having already said to have come round to Ferguson’s way of thinking about the winger, and the fact that he only last month agreed to sign a new deal will haver no impact whatsoever on United’s ability to sell the Portugal international come the turn of the year.

In fact, it actually guarantees that the Red Devils will be able to extract a good sum for Nani, as opposed to the player simply winding down his contract and then leaving on a free transfer.

And it appears as though Nani’s next port of call will still be in the Premier League, with the Gunners having made it be known to their arch rivals in recent days that they are keen to take the attacker off their hands come January, subject to the two clubs being able to come to some sort of amicable agreement over his asking price.

Unlike with the Gunners’ pursuit of unsettled United front man Wayne Rooney earlier this summer, Nani is now not considered to be a prize asset by the Premier League champions, and so Moyes would be prepare to sell the winger to Arsenal when the transfer window opens again in January.

As for Wenger, the Arsenal boss has been keeping close tabs on the player for the past few years, with the Frenchman having previously made enquiries with United about the possibility of bringing Nani to the Emirates.

However, on those occasions Ferguson always preferred to sell the attacker to a club on the Continent, rather than to another team in the Premier League, although that is no longer believed to be the case.

The one potential stumbling block though to a deal being able to go through in the new year could be United’s valuation of their 26-year-old, who with a contract at Old Trafford that runs until 2018, is unlikely to be available for much less than £15m.