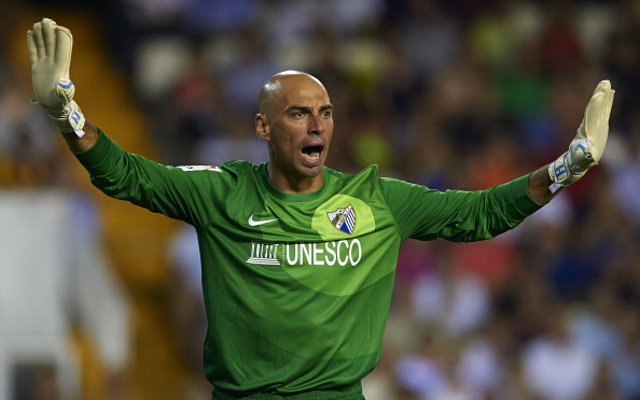 Manchester City boss Manuel Pellegrini is still monitoring Malaga goalkeeper Willy Caballero and will make a decision as to whether he will step up his interest in the player following Joe Hart’s latest cock up against Chelsea this weekend cost them a valuable point, the Daily Mail reports.

The Argentine goalie caught the eye last season with a string of fine performances in the club’s Champions League campaign under Pellegrini and the coach’s interest was confirmed by the player last month.

The 32-year-old, who performed an amazing 13 saves in a game against Real Madrid last term, is seen as a strong dressing room character and Pellegrini is keen to bing him on board to challenge current number one Joe Hart, who slipped up again against Chelsea when he collided with defender Matija Nastasic to gift Fernando Torres with a last minute winner.

Hart is still highly regarded by the rest of his City teammates, though, and is still capable of pulling off a solid performance, as he did in the Champions League tie against CSKA Moscow last week, but Pellegrini believes the 26-year-old will respond positively to some serious competition for a starting spot.

Last month Caballero said: “I spoke to Pellegrini before he left Malaga. I know of his intention to take me with him but I was unsure whether he would stick with the goalkeepers he had or play me.”

However, he is understood to be open to a move to Manchester as Malaga contemplate selling their highest earner in January.