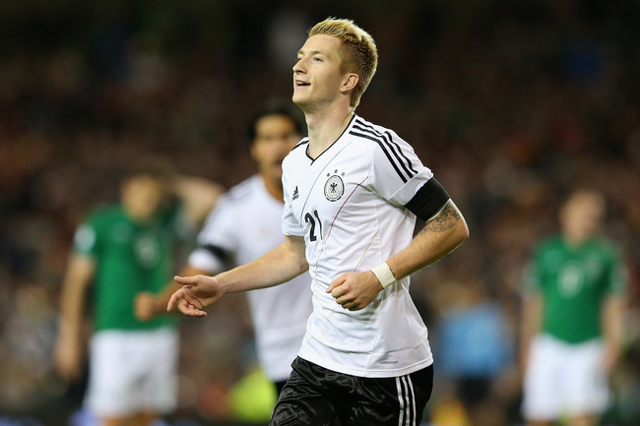 Man United are one of a trio of Premier League clubs ready to launch a big money bid for Borussia Dortmund attacker Marco Reus according to the Daily Star.

David Moyes is joined in the chase for the 24 year old German international by fellow Premier League sides Arsenal and Man City though the player himself has moved to quash such transfer talk stating;

“I live in the here and now, and therefore I am very pleased to be a Borussia Dortmund player,”

“I am under contract with the club until June 2017. Everything else is irrelevant, in my view.”

Man United may feel they could do with more creative attacking options and Reus is perhaps the ideal player Moyes could turn to in order to link his midfield and strike-force though Borussia Dortmund boss Jurgen Klopp will fight hard to keep hold of the former Borussia Monchengladbach man having previously seen Shinji Kagawa leave the Westfalenstadion for Old Trafford.

Reus racked up 18 goals and 11 assists in all competitions last term and is perhaps a player Man United are interested in given that striker Wayne Rooney’s future at the Premier League outfit is still somewhat up in the air.