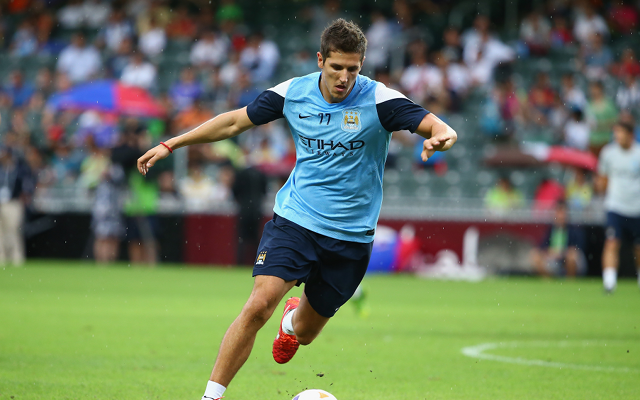 Former Arsenal target could be made available by City.

Arsenal are planning on making an audacious attempt to take out-of-favour Manchester City forward Stevan Jovetic on loan when the transfer re-opens in January, with a view to signing the Montenegro international on a permanent contract at the end of the season, after their mega-rich Premier League rivals let it be known they were already willing to allow their new recruit to leave the club.

Watch Jovetic in action below:

It is already an open secret in the world of football that Gunners head coach Arsene Wenger has been a huge fan of Jovetic for some time now, with many having expected the striker to move to north London when he left Fiorentina at the end of last season.

However, despite going head to head with the Blues, as well as Serie A champions Juventus, for the 23-year-old’s signature this summer, in the end the striker opted to move to the Etihad Stadium instead on a lucrative five-year deal for a fee of £22m in July.

But it is fair to say that since arriving at City Jovetic has endured a torrid time, with new manager Manuel Pellegrini preferring to utilise the likes of Sergio Aguero, Edin Dzeko and fellow summer signing Alvaro Negredo in attack, with Jovetic warming the substitutes’ bench.

In fact, Jovetic has featured in just the four matches in total so far for his new team this season, with the front-man managing to find the back of the net on just two occasions in that time, although neither of those strikes have come in either of his Premier League outings.

It has now emerged that Jovetic was initially a target of previous City manager Roberto Mancini, with a deal still pushed through by the club even after the Italian was sacked, though Pellegrini does not rate the player or see him as part of his long-term plans.

With Txiki Begiristain having already made discreet soundings with Arsenal chief executive Ivan Gazidis in recent weeks to ascertain whether or not the north Londoners would be interested in taking Jovetic on an initial six-month loan deal in January, it appears as though there may now be an unexpected escape route out of this unfortunate situation for both parties after the Gunners indicated a willingness to bring the Montenegrin to the Emirates.

From Arsenal’s point of view, Wenger is at present desperately short of numbers in attack after being forced to spend most of the first half of this campaign so far using only one fit centre-forward in the form of prolific France international Olivier Giroud, following an early hamstring injury picked up by Lukas Podolski in August.

The Gunners manager will have been relieved to see the German forward back in training at London Colney this week, however, the woeful display in front of goal from Danish marksman Nicklas Bendtner in the club’s Capital One Cup fourth-round loss to arch-rivals Chelsea at the Emirates on Tuesday night will only have served to reinforce the need for the addition of more firepower up front in the second half of this season if the club are serious about challenging for honours on more than one front.

All of which means that Arsenal are now certain to come to some sort of agreement with City over a loan move for Jovetic in January, although the exact terms of such a deal are yet to even be discussed or agreed upon, and this may be the tricky part to such a transfer actually taking place.

City will be sure to demand that the player cannot feature against them in the initial six-month loan period, and then the two Premier League rivals will need to come to some sort of agreement regarding the terms of Joevtic’s actual permanent move south at the end of this season, with the big-spending north-west outfit sure to be desperate to want to recoup as much of their original £22m outlay on the front man as is possible.

Meanwhile from Wenger and Co’s perspective, they are fully aware that City do not rate their new acquisition any more, and so will be demanding a cut-price fee for the player.