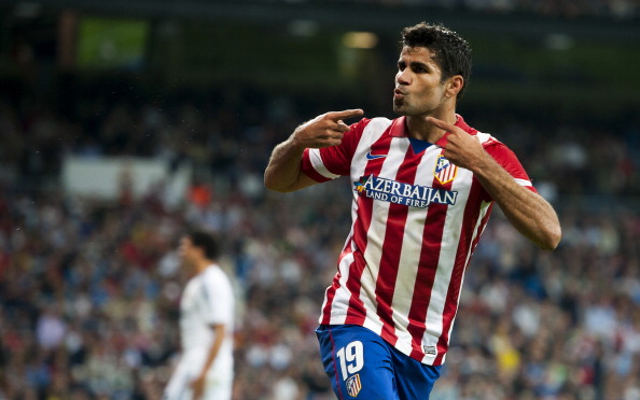 Arsenal are said to have made an inquiry into the availability of in-form Atletico Madrid striker Diego Costa according o well respected journalist Rafael Hernández.

The North London side have been linked with a myriad of potential striker targets as Arsene Wenger is seemingly overly dependent on Olivier Giroud but a move to sign Diego Costa may well prove a tough one to pull off given his excellent start to the current campaign.

The 25 year old Braziian, who has recently chosen to represent the Spanish national team though is still awaiting a first national team cap, netted a laudable 20 goals in all competitions last season but has outdone himself this season, scoring 12 goals in 11 La Liga fixtures, form that has seen Diego Simeone’s side split Spanish giants Barcelona and Real Madrid.

This source rates Costa as being worth €35m (£30m) and that is perhaps an accurate valuation given the amazing form the powerful forward has exhibited over the past few months.

With Wenger choosing to use the likes of Theo Walcott and Lukas Podolski as wide attacking options there is certainly scope for a striker signing and having forked out a club record £42.5m to bring in Mesut Ozil from Real Madrid there is perhaps a chance that Arsenal would make a big money offer for Costa as they seek to end a lengthy silverware drought.

Atletico Madrid are of course well known for cashing in on their top talents with the Vicente Calderon side selling players such as Sergio Aguero, Diego Forlan, David de Gea and Radamel Falcao in recent seasons.