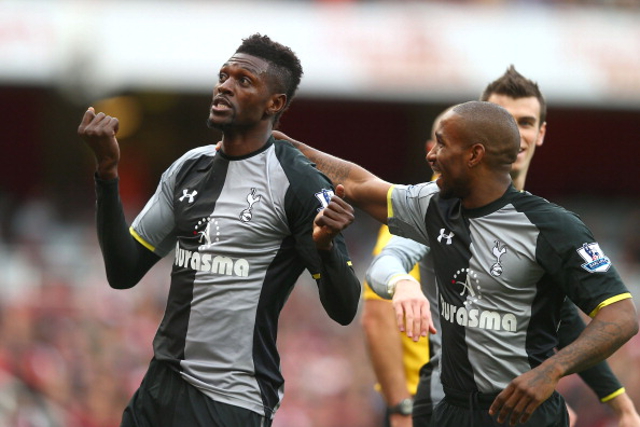 Tottenham boss Andre Villas-Boas is desperately looking to find buyers from strike pair Jermain Defoe and Emmanuel Adebayor as he seeks to free up space for possible January acquisitions according to the Daily Mail.

Having spent around £60m to bring in Roberto Soldado and Erik Lamela from Valencia and AS Roma respectively the White Hart Lane manager is looking to sell his former first choice forwards but is struggling to do so as both players appear keen to remain at the North London club.

31 year old England man Defoe is actually the club’s top scorer, albeit his eight goals have come in the Capital One Cup and Europa League and the former West Ham man has made just one Premier League start. Emmanuel Adebayor has been entirely frozen out of first team action and interest in the former Arsenal and Man City man is thin on the ground, most likely due to the powerful forward’s obscene wage demands.

Defoe is said to have attracted the interest of MLS side Toronto FC though the pint sized finisher is perhaps thinking about his World Cup chances and though a lack of Premier League action could count against him when it comes to Roy Hodgson’s squad selection for the 2014 finals, a move to the States would perhaps entirely rule the striker out of the running.