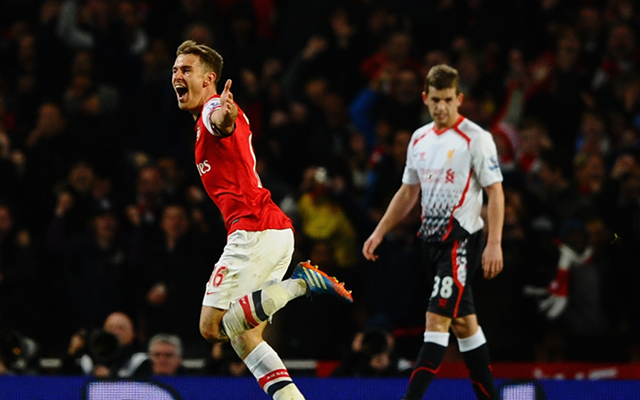 Highlights and player ratings for Arsenal’s victory over Liverpool.

Wojciech Szczesny – 3/5 Made a good early stop by was rarely needed.

Per Mertesacker – 4/5 Put on a defensive masterclass, not troubled by anything.

Laurent Koscielny – 3.5/5 Picked up form where Mertesacker left off.

Mikel Arteta – 3/5 Broke up play well and set Sagna off for the first.

Aaron Ramsey – 4/5 Not at his absolute best but scored a peach of a goal to seal victory.

Santi Cazorla – 4/5 Good running and did well to follow up his own effort to open the first.

Olivier Giroud – 3.5/5 Led the line well and laid ball off to others spectacularly.

Simon Mignolet – 3/5 Solid, could do nothing about the two goals.

Kolo Toure – 2.5/5 Caught out for opener and let Giroud get the better of him. Unlucky not to score.

John Flanagan – 2/5 Couldn’t deal with Arsenal’s attacking intent and had no influence.

Jordan Henderson – 2.5/5 Couldn’t get a foot into the game. Ineffectual.

Luis Suarez – 4/5 Unlucky not to have a brace under his belt. Was a handful all night.

Daniel Sturridge – 3/5 Everything he tried just didn’t work, good running but no service.