Chelsea boss Jose Mourinho will re-ignite his interest in Liverpool striker Luis Suarez in January and is readying a massive offer that he hopes will tempt the Anfield side to sell the Uruguayan international.

CaughtOffside understands that Mourinho will offer £50m as well as bit part player Demba Ba for the 26 year old Liverpool man, who has scored six goals in five Premier League matches since his ten match biting ban came to an end in late September.

Mourinho was left exasperated by his side’s display away at Newcastle United on the weekend and there is no denying that his current crop of striking talents are simply not producing the goods, the aforementioned Ba, Fernando Torres, Andre Schurrle and Samuel Eto’o managing just three Premier League goals between them this season, and as such the Chelsea boss will be handed a significant transfer war-chest to help resolve this ‘problem area’. 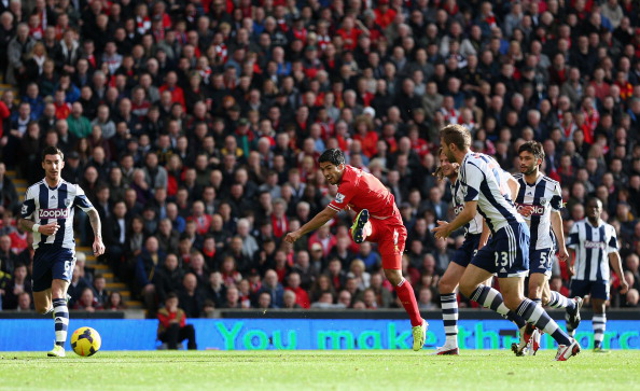 The West London side will hope that a big money offer will encourage Suarez to put in a transfer request that could force Liverpool to consider offers for the former Ajax man.

Jose Mourinho has drawn up a list of potential striker signings but Suarez is now certainly the Portuguese manager’s number one target, not least because the Liverpool man will not be cup tied from Champions League action, a tournament the lethal forward is sure to be on competing in.

Another tick in Suarez’s column comes in the knowledge that the Liverpool man is a proven Premier League goal-scorer, the forward having netted a healthy total of 44 goals in 79 top tier starts.

Brendan Rodgers would be loathed to lose Suarez but if the striker was to look to force the issue and a sale was likely then the offer of Demba Ba in part exchange would at least soften the blow of such a pivotal player.

Prior to his move to West London Ba had netted 36 goals in 66 top tier appearances for Newcastle United and West Ham and could perhaps be keen on a fresh challenge.