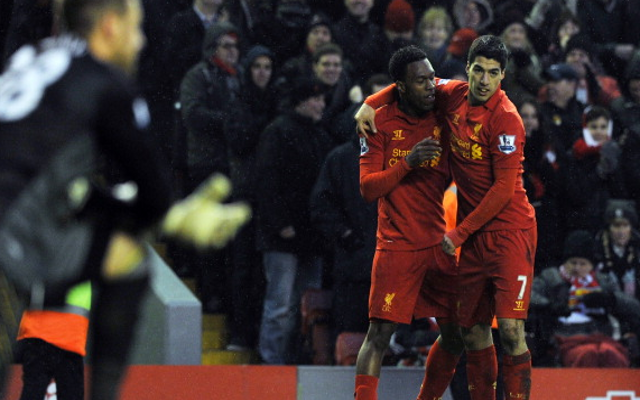 Liverpool striker Daniel Sturridge has said that he hopes to be able to continue his strike partnership with Luis Suarez for a long time to come, talkSPORT reports.

Suarez still faces an uncertain future at Anfield as both Arsenal and Real Madrid are reported to still hold an interest in prizing him away from Merseyside in January.

However, for the time being, the 26-year-old is building a prolific partnership with Sturridge that has seen the two strikers net 16 goals between them so far this term.

And Sturridge has confessed that though Suarez is the one who will decide where he wants to play in the future, he hopes the Uruguayan will stay put for a long time to come and continue to build on the good understanding that the two of them have developed.

“It’s great to play with him, we give defenders problems and we both play differently, so it’s good to have a strike partner you can bounce off,” Sturridge said.

“It’ll be great for him to stay. The club, the players and the fans all want him to stay and I’m sure he will.

“But it’s up to Luis to decide what he wants to do, if he believes it’s best for him to move on then that’s the way it’s got to be.

“We get on well, there’s no rivalry there or any hidden agendas, we just go out there and work hard.

“That’s the most important thing, we’re not individuals, we’re a part of Liverpool football club and the team is more important than the ‘SAS’ strike force or anything else.

“It’s about the club and the fans.”