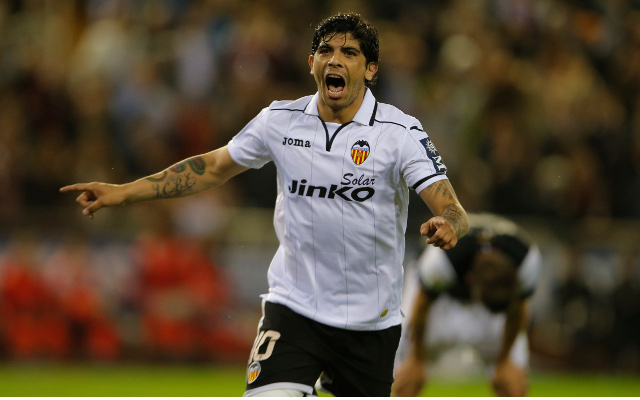 But Southampton, Inter and Napoli are all also desperate to land the player. <a href=’fanatix://eventid/51de59cc034c7d5f27000af9/’ class=’in-app-event-link’>Check in to Valencia CF vs Real Valladolid</a>

Premier League giants Arsenal and Manchester United have both been put on alert after the agent of unsettled Valencia midfield player Ever Banega gave a strong hint that his client would be leaving the Mestalla as soon as the winter transfer window opens for business in the new year, according to reports in the Daily Express.

The highly rated Argentina international has been with the La Liga outfit since January 2008, when the 25-year-old signed for Valencia from Boca Juniors on a five-and-a-half-year deal for a fee of €20m.

As a result, Banega’s contract with the Spaniards now only runs until June 30 2015, and with the player not currently getting selected in the first team by Valencia head coach Mirosalv Djukic, it is understood that the midfielder is desperate to quit the La Liga team come the turn of the year in order to preserve his place in the Argentina national team ahead of next summer’s World Cup in Brazil.

“I can only tell you that we are already talking with several clubs in relation to the next window,” Banega’s agent, Marcelo Simonian, told NapoliCalcioLive.com.

“In the next few days I will be travelling to present all the options to Valencia.”

However, it is believed that both the Gunners and the Red Devils will face stiff competition for Banega’s signature from the likes of Serie A giants Inter Milan and Napoli come January, with the Southern Italian side said to be the favourites at present to sign the player.