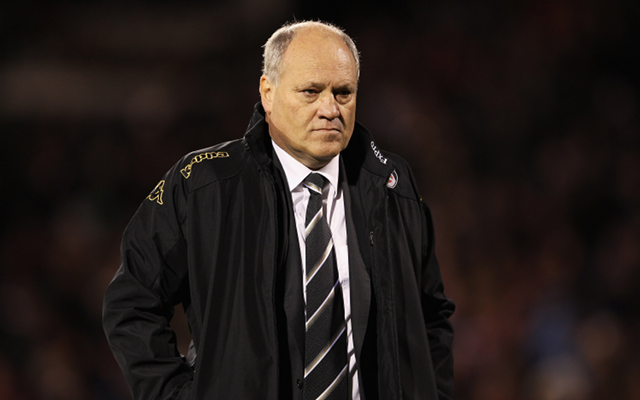 Dutchman will need to find a result, though, when his side take on Swansea City and West Ham United after the international break. <a href=’fanatix://eventid/51c186dc034c7dfe27000068/’ class=’in-app-event-link’>Check in to Liverpool vs Fulham</a>

Under-pressure Fulham head coach Martin Jol says that he does not believe that he will be given the sack if the west London club lose against high-flying Liverpool in the Premier League on Saturday afternoon, according to reports in the Daily Mirror.

The hugely likeable Dutchman takes his struggling side to Anfield in desperate need of a positive result after having watched the Cottagers lose their previous three league fixtures, including a 3-1 loss to champions Manchester United at Craven Cottage last time out.

However, despite the fact that Fulham are currently just two points and two places above Norwich City in the relegation zone after the first ten matches of the season, Jol says that he does not think he will be given his marching orders during the upcoming international break if his men lose on Merseyside this weekend.

“Before Crystal Palace, we really felt some pressure – not because of me but because of the result. Pressure is part of our profession.

“I’m positive, not because I’m a positive character but I remain positive because we are good enough to get results against the teams who are probably as good as us and maybe a little bit better and a little bit worse.

“There will always be four or five teams not as good as we are, and that is what I really believe. That is why I am positive.

“We will have the points on the board. I think, with the spirit we’ve got, we will be fine.”