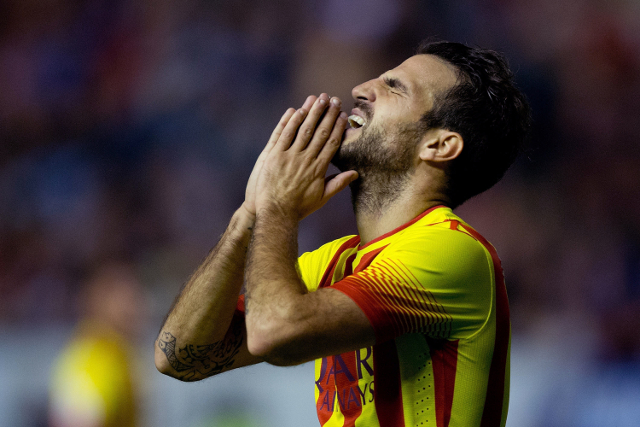 Arsenal may be on red alert following comments made by Barcelona midfielder Cesc Fabregas with the Daily Mail claiming that the former Gunners captain favours a move back to the Emirates Stadium above all other possible next destinations for the Spanish international.

The 26 year old vented his frustrations regarding his role in Gerardo Martino’s first team set-up following Barcelona’s comfortable win over Real Betis, during which the former Arsenal man netted twice.

‘Today was time to say that I am here. I know the boss has a starting team in his head, and I am not in it.’

That statement was perhaps hard to fathom when you consider that no outfield player has played more La Liga minutes than Fabregas, with the former Arsenal man starting 10 of the club’s 13 domestic league fixtures, scoring four goals and providing seven assists in the process.

However Fabregas is used more sparingly in Champions League action, starting two of the club’s four group matches thus far and this source claims that despite the fact that Man United are apparently very much interested in acquiring the Barcelona star it is a move back to Arsenal that is most likely for the World Cup winner.

Fabregas left Arsenal to return to Barcelona back in August 2011 and has made 114 appearances for the Catalan club scoring 34 goals in the process.