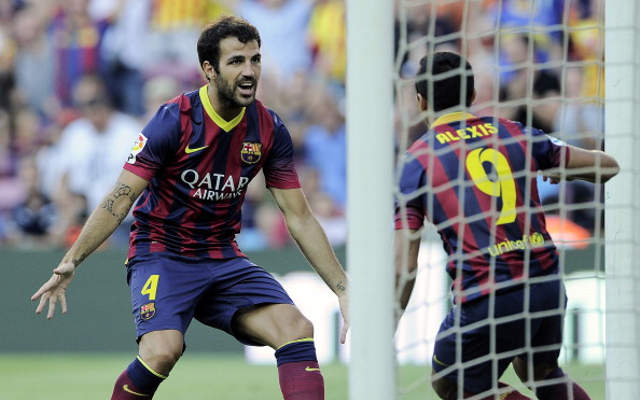 Spaniard has only been back in Catalonia for two years now.

FC Barcelona midfield player Cesc Fabregas has dropped a massive hint that he is not happy with his current playing situation at Camp Nou, according to reports on ESPN.co,uk.

The in-demand Spain international was once again left out of the starting lineup by new Barca head coach Gerardo Martino for the Liga champions’ two most recent important contests, the Catalan derby with Espanyol and the Uefa Champions League showdown with AC Milan.

And despite the 26-year-old being recalled to the Barcelona starting XI for the weekend win over Real Betis, during which Fabregas both scored twice and created another goal for a team-mate, the former Arsenal captain expressed his displeasure about not having been involved more in the big games this season.

“Today was time to say that I am here,” Fabregas told Canal Plus. “I know the boss has a starting team in his head, and I am not in it. I played a good game against Celta, and then I was left out for most of the two games [against Espanyol and AC Milan], and that really messes you up. Today I wanted to vindicate myself so that does not happen again.”

During the summer transfer window, Fabregas’s name was heavily linked with a possible big-money move to Premier League champions Manchester United, although in the end the playmaker opted to remain in Catalonia in order to fight for his place in the first team.

However, despite having featured in 18 matches in total so far under the new Barca boss, Fabregas has still found himself back on the substitutes’ bench whenever a big contest is played.