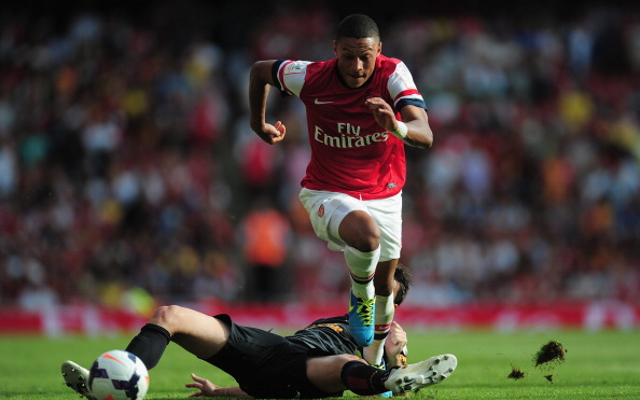 Gunners had initially hoped to have the Englishman back in action by December.

Arsenal have suffered a huge blow with the news that midfield player Alex Oxlade-Chamberlain has suffered a setback in his recovery from a knee injury and is now unlikely to feature for the north London club again this year, according to reports in the Sunday Mirror.

The England international picked up the problem in the Gunners’ shock opening-day Premier League loss to Aston Villa at the Emirates, although it was initially expected that Oxlade-Chamberlain would be back in action by early December at the latest.

However, it is now believed that the wide man’s recovery is not going according to plan, with the 20-year-old unable to resume training much before next month at the earliest, meaning that Oxlade-Chamberlain will definitely not be seen on a football field again in 2013.

And this news will come as a huge blow to both the north Londoners, as well as to England head coach Roy Hodgson, who had pencilled in the highly rated winger to be part of his 23-man squad for next summer’s World Cup in Brazil.

Meanwhile, Arsenal boss Arsene Wenger will also now be unable rely on the Englishman indefinitely as the Gunners go in search of their first piece of silverware since 2005.