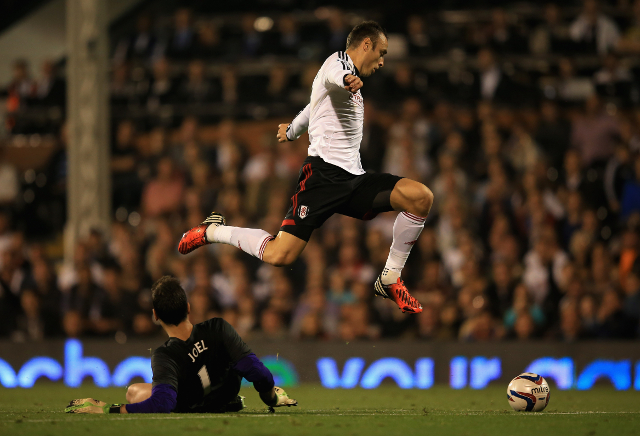 Check in to Fulham vs Swansea City

Fulham veteran has been surprisingly linked with a move to join Barcelona by Spanish source Sport.

A number of experienced strikers are said to be on Gerardo Martino’s wish-list as he looks to supplement his Nou Camp attack, with the likes of Lazio forward Miroslav Klose and Galatasaray’s Didier Drogba also on the Barcelona radar, as the Catalan club seek to strengthen their attack.

Having brought in Neymar over the summer and then seen Chilean Alexis Sanchez show a marked improvement in form this term one would have thought that Martino had more than enough striking options but perhaps the long term injury suffered by Lionel Messi has left the new Barcelona boss feeling he needs extra back-up.

One would imagine the former Man United and Tottenham man Berbatov would jump at the chance of a move to join the European giants, even if in all likelihood it would mean that the Bulgarian would spend a fair amount of time warming the bench.

The 32 year old has proven a success since moving to Craven Cottage, scoring 17 goals in 46 appearances. Prior to his move to West London Berbatov scored 57 goals in 139 appearances for Man United and 46 goals for Tottenham in 102 matches.