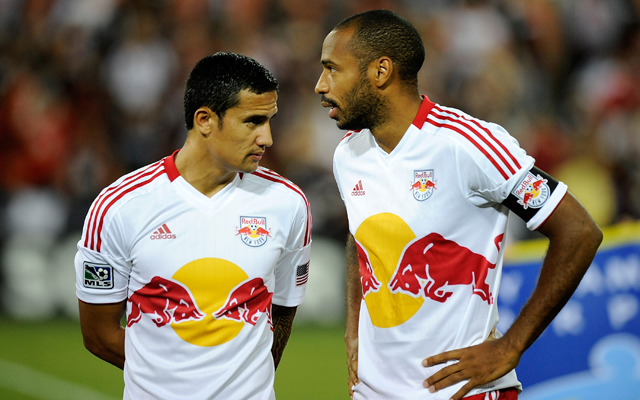 Former Toffee to head back to Britain.

Ex-Everton midfielder Tim Cahill is hoping to secure a short term return to the Premier League in the new year as the MLS season takes its break, according to the Daily Star.

The 33-year-old Australian international is currently on the books with New York Red Bulls, whom he joined in July 2012, but is now free to make a move during the MLS off season in a bid to keep himself in shape.

And Cahill is reportedly looking at making the move back to the Premier League until the American season kicks off again in March.

And a number of clubs have already declared an early interest in landing his signature, with the likes of Sunderland, Fulham, Championship side Queens Park Rangers and former club Everton all said to be keeping a close eye on the situation.

The midfielder wants to maintain his fitness ahead of next year’s World Cup.

He said: “The move depends on getting my body right. But the plan is for the World Cup.”

Cahill has so far made 43 appearances for the Red Bulls, scoring 13 goals as he teams up alongside Thierry Henry in the side’s attack.

In October, Cahill set a new MLS record for quickest goal ever scored when he struck just seven seconds into a 3-0 win against the Houston Dynamo, however, that was scant consolation as the side failed again in their bid for an MLS cup.