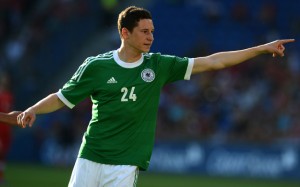 Serie A champions Juventus want to keep hold of in-form midfield player Paul Pogba for the next 18 months and ensure that the France international does not move to either Arsenal, Manchester United or Manchester City.

Newcastle United are interested in signing  25-year-old Bordeaux forward Cheick Diabate in what would be the the ninth arrival at St James’ Park from Ligue 1 in recent times.

Italian giants Juventus are keen to sign Manchester United winger Luis Nani in order to help them retain their Serie A title for a third straight year this season.

Arsenal will not be able to bring in-demand Schalke 04 midfield player Julian Draxler to north London until after next summer’s World Cup finals in Brazil.

Everton target Eddy Onazi claims that he “would jump at the chance” to play for their city rivals Liverpool.

Premier League new boys Cardiff City will go head to head with La Liga side Elche in the battle to sign Braga forward Hugo Vieira when the winter transfer window opens again for business in the new year.

Out-of-favour Manchester United midfield player Anderson says that he wants to remain with the Premier League champions rather than move to struggling Fulham in the new year.

West Bromwich Albion are in danger of seeing highly rated manager Steve Clarke walk out of the Hawthorns at the end of this season after contract talks between the Scot and the Baggies broke down.

West Bromwich Albion will hand in-form forward Saido Berahino a new contract so as to ward off interest in the England Under-21 international from rival top-flight clubs.

Manchester City striker John Guidetti could be about to join Doncaster Rovers on loan.

Manchester United’s England U21 international Will Keane is set to move to Championship outfit Wigan Athletic on a six-month loan deal in January.

Stoke City look like missing out on front man Juan Agudelo due to problems with the American’s work permit.

England boss Roy Hodgson could be on a collision course with his Arsenal counterpart Arsene Wenger after the north London club’s midfield player Jack Wilshere picked up yet another ankle injury in Tuesday’s friendly defeat to Germany at Wembley.

Former England captain John Terry would refuse to come out of international retirement for next summer’s World Cup in Brazil if the Chelsea centre back were asked to perform a dramatic U-turn.

Boss Joachim Loew believes that young Arsenal winger Serge Gnabry could be a shock inclusion in the German World Cup squad for next summer’s tournament in Brazil.

Arsenal will find out this week if their potentially decisive final Uefa Champions League group-stage fixture with Serie A outfit Napoli will be played behind closed doors after crowd trouble affected the Italian club’s previous home match against Marseille.

Liverpool head coach Brendan Rodgers claims that having to deal with controversial front man Luis Suarez has made him a better manager.

Hull City owner Assem Allam will refund any fan who is said to be unhappy about the club’s change of name to the Hull City Tigers.