These players are no stranger to a red card, or even a court case… 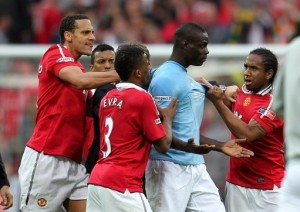 Aged only 23, Balotelli has already attracted a lot of negative press for his antics on and off the pitch. Having been photographed firing Air Pistols, posing with two noted Mafia mobsters and leaving a strip club 48 hours before a Premier League game, which resulted in a £250,000 fine for the striker. Further controversies include his AC Milan boss banning him from go-karting due to risk of injury, only for Balotelli to drove his own Ferrari around the track. Almost setting his own house on fire whilst playing with Fireworks and a bust up with his former Manager at Manchester City, Roberto Mancini.  All of these incidents are reason enough for the Italian’s famous slogan ‘Why always me?’.