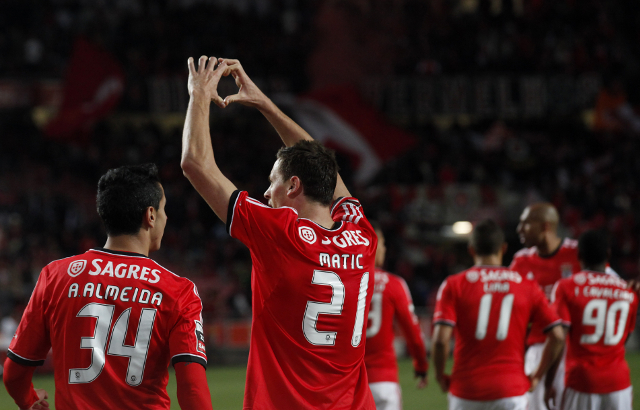 Check in to Bayer Leverkusen vs Manchester United

The Old Trafford side are one of many chasing the towering Serbian though the Record claim that David Moyes is leading the chase to sign the rangy performer, who has a £40m release clause.

The 25 year old midfielder has done well to resurrect his career after failing to make the grade at Chelsea, making the most of his move to Benfica back in January 2011, part of the deal that saw Brazilian Ramires join the Stamford Bridge club.

The powerful Serbian international has become a pivotal player at the Lisbon based club, making a total of 46 appearances in all competitions last term during a season that saw Benfica finish runners-up in the Primeira Liga, the domestic cup and the Europa League.

Moyes may well feel the need to freshen up his midfield, with new signing Marouane Fellaini failing to set the world alight as yet. The likes of Anderson, Ashley Young and Shinji Kagawa may well feel their Man United career’s hang in the balance after continuing to put in average displays when called upon.

Watching scouts will have been impressed with Matic’s terrific all round display against Sporting Braga on the weekend, with the strong midfielder capping off a fine display by scoring the winning goal.