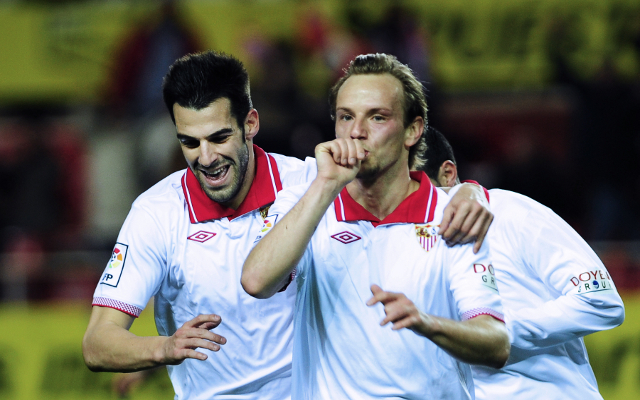 Croat has a contract in Andalucia that runs until 2015.

Chelsea hope to beat Premier League rivals Manchester United and Liverpool to the signing of in-form Sevilla midfield player Ivan Rakitic when the winter transfer window opens again for business in the new year, according to reports in the Daily Express.

The Croatia international has been one of the stand-out performers in La Liga so far this season, with some even claiming that only the FC Barcelona duo of Lionel Messi and Neymar and Real Madrid’s Cristiano Ronaldo have been on better form that Rakitic has in Spain in this campaign.

In total, the 25-year-old has managed to record an impressive nine goals and 10 assists in his 22 matches in all competitions, including an equally eye-catching seven strikes and six assists in 13 Liga outings for the Southern Spanish side.

And as a result, it is understood that the Uefa Europa League holders are now leading the race to bring Rakitic to the Premier League in January, although the west London club may need to splash the cash however in order to convince Sevilla president Jose Maria Del Nido to allow his star man to depart the Ramon Sanchez Pizjuan at the turn of the year.