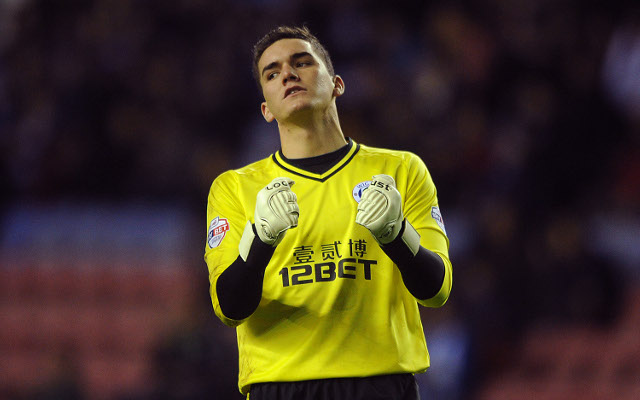 Englishman has a contract with the Latics that runs until the summer of 2015.

Premier League giants Liverpool are eyeing up a move for highly rated young Wigan Athletic goalkeeper Lee Nicholls, according to reports in the Sunday Mirror.

The former England Under-19 international has developed a reputation as being one of the most impressive shot stoppers in the Championship so far in this campaign, so much so that Reds head coach Brendan Rodgers has sent his scouts to the DW stadium on several occasions in the past few weeks to keep close tabs on Nicholls.

And despite the fact that the 21-year-old recently made a high-profile and costly error to gift victory to Belgium outfit Zulte Waregem in the Uefa Europa League, that has apparently not put the Merseysiders off making a move for Nicholls.

The Liverpool manager is said to be wanting to bring in a younger back-up keeper to first-choice Simon Mignolet at Anfield going forward, with the Northern Irishman looking to replace current understudy Brad Jones at the club.

And it looks like Nicholls, who was actually born in Huyton on Merseyside and played for the Reds youth teams before leaving Liverpool at the age of 14, could very well be the man Rodgers is after.