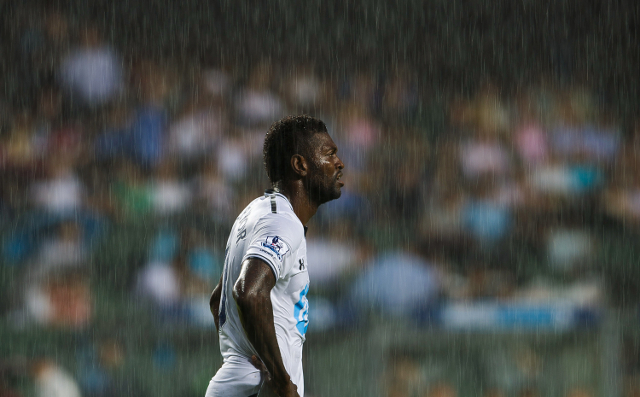 Unsurprisingly the Old Trafford side were not keen on White Hart Lane flop.

Tottenham reportedly attempted to offload Togo international Emmanuel Adebayor as part of a proposed deal that would have seen Gareth Bale join Man United according to the Daily Star.

The North London side were apparently well aware that David Moyes had hoped to land Welsh winger Gareth Bale and attempted to include Adebayor as part of any deal to sell the Tottenham attacker.

Unsurprisingly such a deal did not interest Moyes and Bale ended up leaving for Real Madrid in a world record £85m deal.

Tottenham are urgently looking to offload 29 year old striker Adebayor due to his obscene salary, said to be worth a total of £140k a week, a portion of which is still being paid by his former club Man City.

After an impressive loan season at Tottenham, during which Adebayor netted 18 goals and provided 12 assists, the powerful forward was signed on a permanent basis which has led to a lengthy run of poor form.

Emmanuel Adebayor has scored just five goals in his past 26 Premier League appearances and seemingly Moyes did not feel that the Tottenham man could add anything more to an attack that already includes Robin Van Persie, Wayne Rooney, Javier Hernandez and Danny Welbeck.