The Merseyside giants are still in the running for a top-four finish in the Premier League this season, however, do you agree that this is the best starting XI that head coach Brendan Rodgers can pick from the squad that he has available to him?

Below is the strongest XI that we believe the Merseyside giants can field, although please do tell us if you disagree with any of the choices that we have made?

In goal, there can be no doubting the claims of Belgium international Simon Mignolet, who has been ever-present in the Premier League so far since his £9 million arrival from Sunderland during the summer and one of the club’s best performers in this campaign.

In front of the Reds No 1 is a solid-looking back four comprising right-back Glenn Johnson, centre-backs Martin Skrtel and Daniel Agger and left-back Jose Enrique.

England international Johnson is now one of the first names down on the team sheet at Anfield, while on the opposite side of the back four, marauding Spaniard Enrique has been equally effective as an attack-minded full back too.

Meanwhile, at the heart of the Liverpool defence is a rock-solid combination comprising the national team captains of Slovakia and Denmark, Skrtel and Agger respectively, one a physical, rugged defender, the other a ball-playing centre back.

Holding in front of the Merseysiders’ back line will be Brazilian water carrier Lucas Leiva, while just ahead of the blond-haired midfield player are inspirational captain Steven Gerrard and hard-working Englishman Jordan Henderson.

And then finally up front in an attacking-looking front three comes Luis Suarez, Daniel Sturridge and Philippe Coutinho.

The mercurial, but world-class, Uruguay international will operate from the left-hand side of the forward line, while the little Brazilian schemer will come in from the right, with England front man Sturridge the man in the middle with the responsibility for putting the ball in the back of the net. 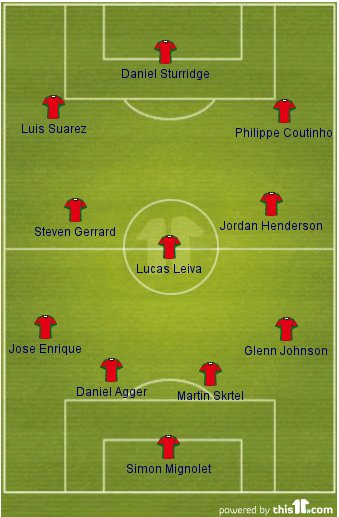