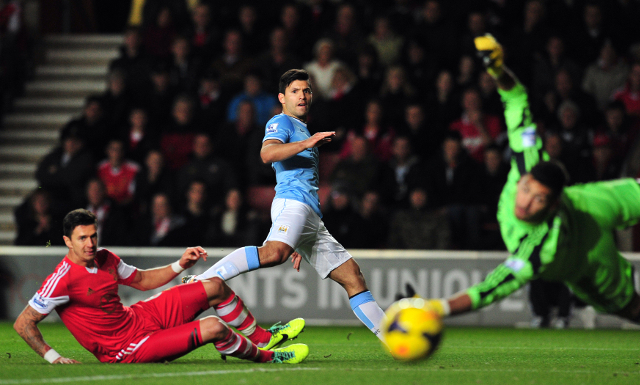 Real Madrid have re-assessed their valuation of Man City striker Sergio Aguero with the Spanish giants now ready to fork out £60m for the Argentine according to the Daily Star.

The 25 year old has been in fabulous form of late and the former Atletico Madrid man is now considered one of the hottest striking properties in world football.

Aguero has scored 18 goals in 19 matches in all competitions this term and is a player Etihad Stadium boss Manuel Pellegrini will resist offers for.

Carlo Ancelotti may feel that Aguero is a better fit to fill Real Madrid’s central striking role than current first choice starter Karim Benzema, with the likes of Gareth Bale and Cristiano Ronaldo being used in wide attacking roles.

The chance to move to the Bernabeu may tempt Aguero, despite his previous affiliation with local rivals Atletico, and now Real Madrid see the Man City man as a more tempting target than Liverpool ace Luis Suarez.

Aguero proved a massive hit during his previous stint in La Liga when the lethal finisher scored 101 goals in five season at the Vicente Calderon.