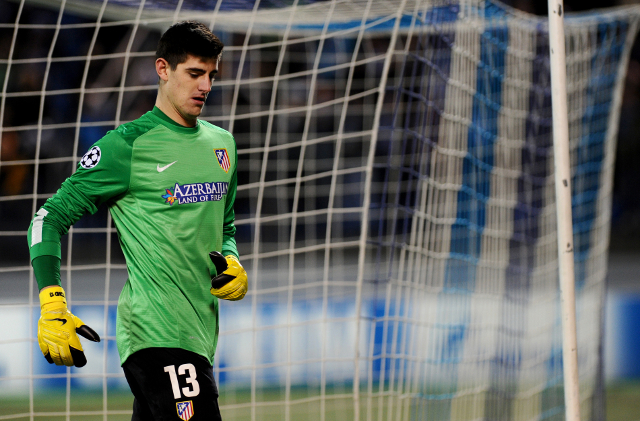 Barcelona have set their sights on bringing in Chelsea keeper Thibaut Courtois as a long term replacement for exit bound custodian Victor Valdes according to the Daily Mail.

The 21 year old Belgian is into his third season long loan spell at Atletico Madrid and could well be considering his options given that Petr Cech seems a nailed on starter for Chelsea under Jose Mourinho.

A move to Barcelona would therefore more than likely tempt Courtois, who has been in excellent form at the Vicente Calderon.

Courtois will not want to return to Stamford Bridge to simply warm the Blues bench and Chelsea could opt then to cash in on the former Racing Genk man who is still yet to play a single senior game for the West London club.

The youngster is now the first choice Belgian national team keeper and this is down chiefly to his efforts at club level with Atletico, who he has helped to Europa League and Copa del Rey triumphs in the past two seasons.

The 6ft 6in goalkeeper has made 120 appearances for the La Liga side and will be looking to secure regular first team football in the long term and that may well prove plausible at the Nou Camp given that Valdes has stated his intention to leave the Catalan giants in the summer.