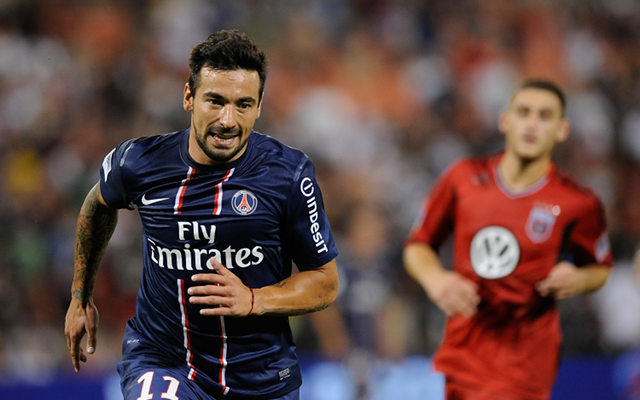 Unsettled Argentinian has been playing second fiddle to both Edinson Cavani and Zlatan Ibrahimovic in the French capital so far in this campaign.

Premier League leaders Arsenal are hoping to be able to add to their attacking numbers by making a move for highly rated Paris Saint-Germain front man Ezequiel Lavezzi when the winter transfer window opens again for business in the new year.

The north London club are currently enjoying a brilliant season so far, both at home in the Premier League, as well as in European club football too.

At present, the Gunners hold a five-point lead in the top flight over both second-placed Liverpool and third-in-the-table Chelsea after the opening 15 matches of the new season, while the club also managed to qualify for the knockout phase of the Uefa Champions League on Wednesday night, despite going down 2-0 to Napoli in Naples.

However, despite the eye-catching beginning to the season, Arsenal head coach Arsene Wenger is still understood to be deeply concerned about the state of fitness of his one and only true out-and-out centre forward at the Emirates, France international Olivier Giroud.

The prolific striker’s outstanding form in front of goal so far in this campaign has been one of the chief reasons as to just why the north Londoners have been the team to beat in the Premier League.

In fact in total, Giroud has managed to find the back of the net on an impressive 10 occasions in just 19 matches in all competitions, including an equally eye-catching seven strikes in only 12 Premier League outings for the Gunners.

But as everyone is more than well aware of in the capital, the Frenchman is the club’s one and only real forward and were an injury to befall the 27-year-old, then there is every possibility that the Gunners’ season could very well implode.

Wenger is able to call upon the likes of misfiring Denmark international attacker Nicklas Bendtner, while Germany international forward Lukas Podolski is also fast approaching full fitness again finally, as in England international wide man Theo Walcott, who is more than capable, if asked to, of playing in a support position behind a central marksman.

However, none of those players could be relied upon though to play as a lone striker were Giroud to be missing in action and with Wenger known to be worried that his front man’s fitness levels are getting dangerously close to entering the red zone of late, which is a measure by which the Frenchman can work out which of his players are in need of a rest, then it is expected that the Arsenal boss will definitely be entering the transfer market again next month to sign some a striking reinforcement.

And the man that Wenger is understood to be eyeing up at present is PSG’s unsettled forward Lavezzi, a player who has reportedly been keen to explore the possibility of quitting the Ligue 1 champions of late.

Lavezzi has only been at the Parc des Princes now since July 2012, when the highly rated Argentina international moved to the French capital from Serie A outfit Napoli on a lucrative four-year deal for a whopping transfer fee of 30 million euros.

And the attacker enjoyed an excellent debut campaign with the Ligue 1 giants, with Lavezzi managing to record an impressive 11 goals and eight assists in total in his 42 matches in all competitions for his new team, including three strikes and seven assists in his 28 league matches for the Parisians.

But the mega-rich French outfit lost manager Carlo Ancelotti at the end of the previous campaign to Real Madrid, with the Italian being replaced in Paris by the ex-les Bleus national team coach Laurent Blanc, and it is fair to say that Lavezzi has not enjoyed the same close relationship under Blanc as he did with Ancelotti.

So much so that in this current season, the Argentinian has at times found himself surplus to requirements at PSG, spending large periods warming the substitutes’ bench, meaning Lavezzi has managed to hit the back of the net on just the two occasions in total in his 20 matches in all competitions, both strikes which came in his 12 Ligue 1 outings for the club.

However, with the 28-year-old now thought to be hugely concerned that he may lose his coveted starting spot up front in the Argentina national team at next summer’s Fifa World Cup finals in Brazil due to his recent lack of playing time with PSG, it is understood that the player has now asked his agent to find him a new club to play for on loan when the transfer window reopens next month.

And leading the chase for Lavezzi are believed to be Arsenal, a team that the striker is said to be keen to play for, although Wenger knows that he will face competition for the South American’s signature from north-London rivals Tottenham Hotspur at the turn of the year.