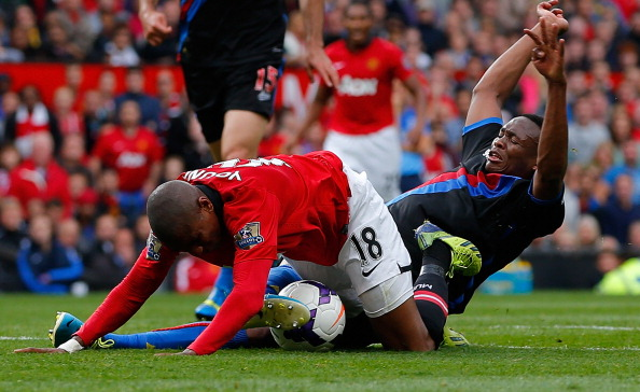 Manchester United winger Ashley Young has admitted he has a penchant for diving but has refused to apologise for it and has said that is on referees to address the subject rather than him having to correct it, reports the Telegraph.

The former Aston Villa man has said that he has spoken to both Sir Alex Ferguson and David Moyes about his reputation as a showman, but has said it is not up to him to do anything about it.

Young has been the topic of debate this season after his theatrics earned United penalties against Crystal Palace and Real Sociedad.

Ferguson admitted in his recent autobiography that he had previously dropped the 28-year-old because of his eagerness to dive as he has been the focus of taunts and jeers from not only opposition supporters, but his own too.

“It (diving) has been talked about (with Moyes), yes,” Young said.

“It’s been talked about obviously, by the previous manager and the current manager, but that’s in house. I’m not going to comment on what’s been said.

“But I think it’s one to ask the referees – they are the ones who are giving free-kicks and penalties.

“I remember getting booked against Palace and then won a penalty (later in the game). Against Real Sociedad, it was another penalty that was given.

“Referees have tough decisions to make, they have a tough, tough time out there making decisions, but they have made the right decisions I think.”

Despite finding himself in the eye of the storm following the alleged dives against Palace and Sociedad, Young claims he is unfazed by the negative publicity.

“I don’t take notice of the headlines or the debates,” Young said. “That’s obviously for the media to debate and people to have their say on it.

“Everyone is entitled to have their say on it, but for me, the referees have made decisions and that’s it.

“Of course I understand what you’re saying (about gaining a reputation) and everyone is going to have their say on it.

“But I’ve spoken to the previous manager and current manager, the referees are giving decisions and that is where I think it lies.”