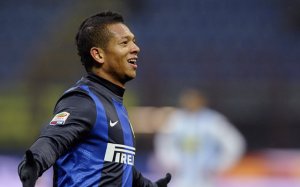 Representatives from both Tottenham Hotspur and Manchester United met with Guarin’s agent on Thursday, however, Premier League rivals Chelsea have now dropped out of the running for the Colombia international.

Manchester United have no plans just yet to start negotiations with unsettled front man Wayne Rooney over a new contract for the England international, even though arch-rivals Chelsea are set on making another move for the player at the end of this season.

Both Chelsea and Manchester United are keen on bringing experienced Real Madrid midfielder Xabi Alonso back to the Premier League in the summer, while the Spaniard’s former club Liverpool are said to also be monitoring the player’s situation at the Santiago Bernabeu.

Chelsea have already spoken to mega-rich Ligue 1 outfit AS Monaco about the possibility of signing red-hot forward Radamel Falcao when the transfer window opens again next month amid speculation that the Colombian does not currently see eye to eye with the French club’s manager Claudio Ranieri.

Chelsea will try and sign highly rated young Southampton left-back Luke Shaw in the new year, with the England Under-21 international expected to cost the west London club £20m to buy.

West Ham United boss Sam Allardyce says that he “has not heard anything” about the Hammers signing former Newcastle United attacker Obafemi Martins on loan in January.