Check in to Liverpool vs Cardiff City

CaughtOffside understands that the Bernabeu side have made the Uruguayan international their number one transfer target and Carlo Ancelotti’s eagerness to sign the 26 year old will lead to a number of Real Madrid players sacrificed in order to balance the books at the La Liga club.

The Spanish giants spent over £135m on new additions over the summer but still find themselves behind arch rivals Barcelona and even lagging behind city rivals Atletico Madrid, however Ancelotti will be encouraged to sell two or more players from his expansive squad ahead of a huge offer for Liverpool star Suarez.

Ancelotti believes that Suarez would be the ideal central striking weapon to spearhead a front three that would see Cristiano Ronaldo and Gareth Bale providing top quality support from wide areas.

With this in mind French forward Karim Benzema is likely to be sold, with youngsters Alvaro Morata and Jese Rodriguez both seen as a long term assets. 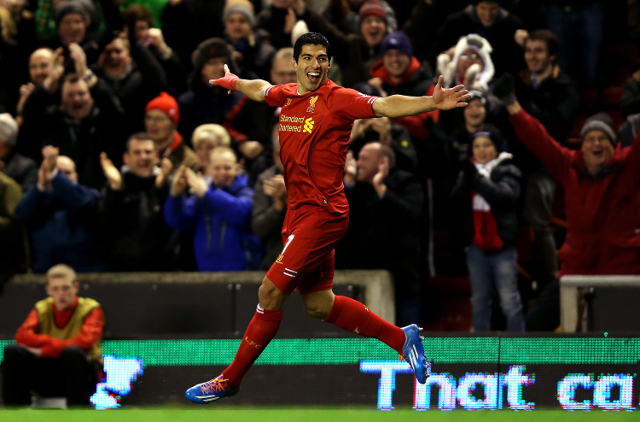 Luis Suarez has been in sensational form since returning from the ten match ban he received for biting Chelsea defender Branislav Ivanovic.

The Liverpool ace has scored an astonishing 17 goals in 11 Premier League appearances this season and as such has led to Real Madrid being open to significantly readjusting their valuation of the former Ajax man.

Real Madrid are confident that such an offer would be next to impossible for Liverpool to turn down, especially if Brendan Rodgers has failed to secure a top four finish and the resultant cash cow of Champions League qualification.

Indeed Real Madrid still feel that they have received enough encouragement from Suarez that he has his heart set on a move to join the club regardless of whether Liverpool successfully succeed in their goal of a return to European football’s top table.