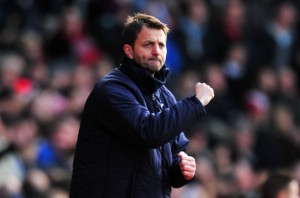 Tottenham Hotspur chairman Daniel Levy has caused a major surprise by deciding to hand interim boss Tim Sherwood an 18-month contract to take over from the recently sacked Andre Villas-Boas at White Hart Lane on a full-time basis.

Chelsea are targeting the Benfica duo of Lazar Markovic and Nemanja Matic when the winter transfer window opens again for business in the new year.

Everton head coach Roberto Martinez says that the Toffees will not sell star man Ross Barkley even if the Merseysiders were to receive a world-record fee of £86 million for the England international.

Highly rated Cruzeiro midfield player Everton Ribeiro has claimed that he would rather join Premier League champions Manchester United than La Liga giants Real Madrid next month if given the choice.

Tottenham Hotspur and Arsenal target Angel Di Maria has denied that he has asked to leave the Santiago Bernabeu in January.