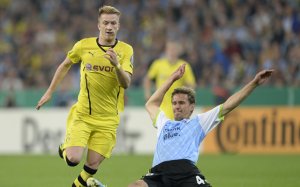 Premier League champions Manchester United have been warned that it will now cost them a whopping £40 million if they still wish to lure highly rated Borussia Dortmund forward Marco Reus from the Bundesliga to the Old Trafford in the January transfer window.

Hull City are eyeing up a £6 million move for out-of-form Sunderland front man Steven Fletcher when the winter transfer window opens again for business in the new year, even though the Scotland international has not found the back of the net since Oct 27 after struggling badly with an ankle injury of late.

A whole host of big-name Premier League clubs have been put on alert after in-form Torino wide man Alessio Cerci confirmed his intention to quit the Serie A club in January in search of a club featuring in this season’s Uefa Champions League, with the likes of Manchester United and Arsenal having both been linked with the Italy international of late.

Premier League strugglers West Bromwich Albion are on the verge of appointing former Real Betis manager Pepe Mel as a replacement for the recently departed Steve Clarke in the Hawthorns hot seat, with the Baggies hoping to be able to confirm the experienced Spaniard in the role after Saturday’s Premier League encounter with West Ham United.

Serie A outfit Lazio are eyeing up a move for one-time Chelsea boss Roberto Di Matteo, with the Roman giants wanting their former midfield star to replace Vladimir Petkovic in the Italian capital.

Liverpool are hoping that influential skipper Steven Gerrard could now be back in action quicker than first thought after the veteran midfield player tore his hamstring earlier this month, with the England international initially ruled out of action for six weeks, although now the player is set to return to training in the new year.