CaughtOffside understands that Blues chief Roman Abramovich has been in extensive talks San Siro vice-president Adriano Galliani after AC Milan owner Silvio Berlusconi made it clear that he was ready to listen to offers for the 23 year old Italian international.

The Stamford Bridge side are looking to complete a deal to bring in the former Man City man within the next 48 hours, with Chelsea boss Jose Mourinho keen to welcome his former Inter Milan charge in to boost his ailing attack.

Though Balotelli is cup tied from Champions League action, a fact that has lessened the striker’s value, Mourinho is still looking to seal a move for the eccentric marksman this month as he pushes to secure the Premier League title in the first season of his second spell at Stamford Bridge.

Despite the fact that AC Milan have been in woeful form Balotelli has scored at a prolific pace, netting 20 goals in 29 appearances for the Italian giants since his move a year ago from the Etihad Stadium, a move that is still being paid off in installments. 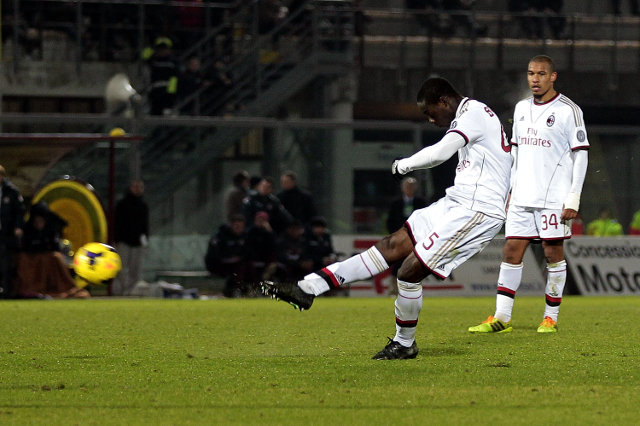 Chelsea currently sit in third spot in the Premier League, just two points off the top of the table, so with the addition of a proven goalscorer who is in-form Mourinho may well feel his chances of securing the title will be significantly increased.

Jose Mourinho’s pursuit of another Serie A target, Inter Milan midfielder Fredy Guarin, has on the other hand reached something of an impasse with the Colombian seemingly using Chelsea’s interest to help boost his chances of earning an improved contract.

The 27 year old former FC Porto man has stated his intention to remain at Inter and this may well lead Mourinho to target other central midfield targets though it appears his pursuit of a player for the role is in no way more pressing than his urgent pursuit of a prolific striker.

Mourinho’s push to land Balotelli is no surprise given that Fernando Torres, Demba Ba and Samuel Eto’o have failed to retain any level of consistency this season with the trio managing just seven Premier League goals between them from a combined total of 34 appearances.