Emirates Stadium side hope to complete deal within the next week to ten days.

Arsenal will trigger Schalke midfielder Julian Draxler’s release clause this month as Arsene Wenger seeks to land the German international ahead of a number of prospective buyers.

CaughtOffside understands that representatives of the North London club have already met with their Schalke counterparts as they look to push on with a deal to sign the 20 year old in a move that the Bundesliga side apparently see as inevitable.

The Gelsenkirchen club planned for such an eventuality back in May when they tied down Draxler to a new four year contract which included a €45m (£37.3m) release clause, which Arsenal are ready to pay, with the German side preferring to see their prized asset move abroad with mounting interest said to be coming in from both Bayern Munich and Borussia Dortmund.

Schalke signed Sidney Sam from Bayer Leverkusen earlier this month, a move that is seen by many as a tacit admission of Draxler’s imminent departure. 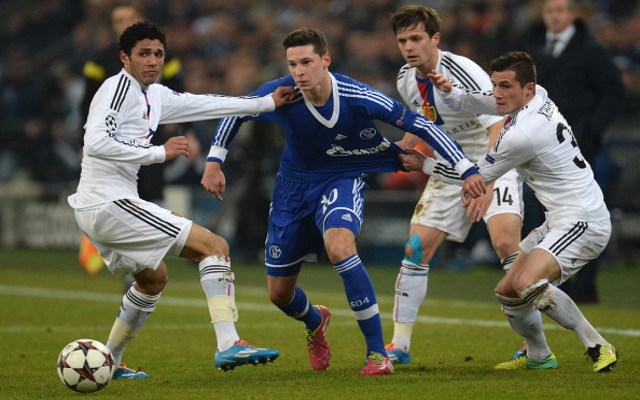 Having forked out £42.5m to bring in Mesut Ozil from Real Madrid last summer Arsenal have proven they are ready, willing and financially capable of pulling off big money signings and Arsene Wenger has urged his board to foot the bill for Draxler as he looks to usher in a new era of success at the Emirates Stadium following eight seasons without silverware.

Draxler has already amassed 133 top tier appearances for Schalke and has ten national team caps and Arsene Wenger will hope that the chance to team up with compatriots Per Mertesacker, Lukas Podolski and Mesut Ozil at Arsenal will act as a motivating factor as the Premier League club prepare to enter into talks with the player once his release clause fee is met.