Emirates Stadium side close in on talented youngster.

Check in to Arsenal vs Fulham

CaughtOffside understands that the North London club are in talks with the Bundesliga side and ready to trigger the youngster’s €45m (£37.4m) release clause in the next 48 hours.

Arsene Wenger has convinced his Emirates Stadium board to back him financially in the pursuit of the German international, who’s arrival would both adhere to his youthful transfer policy whilst also acting as a statement of real intent in the transfer market.

Arsenal are willing to fork out such a large outlay in the safe knowledge that should it prove necessary Draxler is a commodity with great sell-on value potential.

Schalke appear to be planning for the loss of the attacking midfielder having brought in Sidney Sam from Bayer Leverkusen and also approached Tottenham in their pursuit of a deal to re-sign young midfielder Lewis Holtby. 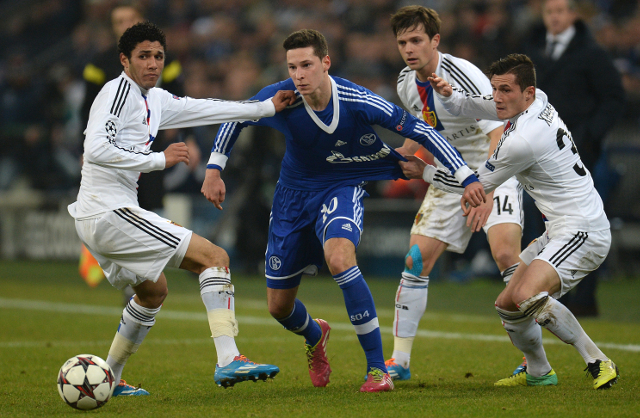 Draxler is said to be keen to leave Schalke and is ready to leave this month even though doing so would mean him missing out on the opportunity to represent his side in the last 16 of the Champions League.

The Schalke youngster may well feel that a high profile move in January will further boost his chances of securing a prominent role in the German national team set-up at the 2014 World Cup finals.

Draxler turned 20 last September but has already made 133 top tier appearances for Schalke and his displays in the Champions League are further evidence that the midfielder is able to cut it at the highest level.

Arsene Wenger is keen to secure a deal in January to prevent Arsenal fighting a host of other prospective suitors in the summer and Schalke are keen that Draxler, who’s exit they deem inevitable, doesn’t join domestic rival Bayern Munich or Borussia Dortmund.

The chance to play under Wenger is said to greatly interest Draxler, who has already visited the club’s London Colney training complex.

Should Draxler move to Arsenal he will line-up alongside national team colleagues Mesut Ozil, Lukas Podolski and Per Mertesacker.