Stamford Bridge side to offer Belgian duo as bait in pursuit of Vicente Calderon pair.

CaughtOffside understands that having cashed in on youngster Kevin de Bruyne, who has left to join Bundesliga side Wolfsburg, Mourinho is ready to use his fellow countrymen as bait in pursuit of two in-form Vicente Calderon stars this summer.

Mourinho has been linked with an interest in 25 year old goal machine Costa for some weeks and his pursuit of a proven prolific forward continues with the likes of Fernando Torres, Samuel Eto’o and Demba Ba all failing to net regularly this term.

Costa has netted 19 goals in 19 La Liga fixtures and is now a Chelsea target and a player Mourinho may feel he can lure to Stamford Bridge with the offer of a big pay-rise.

Atletico Madrid are well known for cashing in on their top talents having sold the likes of Sergio Aguero, David de Gea, Radamel Falcao and Diego Forlan in recent seasons though boss Diego Simeone would be loathed to allow Costa leave this month with Chelsea’s advances perhaps more likely to bear fruit in the summer, hence the option of offering a ready made replacement in the form of Lukaku.

The 20 year old forward has been in marvelous form on loan at Everton, following an equally strong spell at West Brom last term, and Mourinho is keen to tempt Atletico into selling Costa with the offer of Lukaku in a part exchange deal. 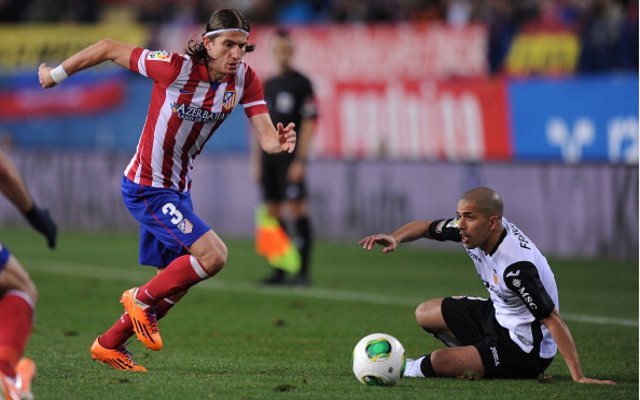 Mourinho will also look to lure left-back Luis as a replacement for Ashley Cole, who is set to be out of contract in the summer.

The experienced Atletico defender has been a virtual ever present since his move from Deportivo La Coruna back in July 2010.

Jose Mourinho knows Felipe Luis well from his time managing Real Madrid and coming up against the powerful full-back and believes the sweetener of offering keeper Courtois as part of this double deal can aid a push to bring in the Atletico Madrid pair to West London.

Simeone is keen to make the club’s ongoing temporary addition of Thibaut Courtois a permanent one and as such could be ready to consider a double player swap offer.

Chelsea will almost certainly have to offer additional funds into the mix to secure Luis and Costa but this in itself will not prove a problem as Mourinho is set to be bankrolled by Blues owner Roman Abramovich as the Russian billionaire prepares to back the returning boss in the transfer market.