With the January transfer window having been open now for the past three weeks, we take a look at five possible new recruits who could be heading to Old Trafford before it slams shut for the season once again at the end of the month. 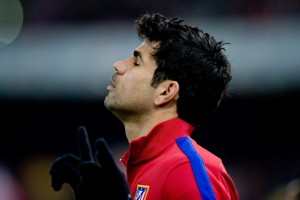 The Premier League champions have been scouting the deadly Spain international for most of this season as new head coach David Moyes looks to add more strength in depth to his forward line, especially given the continuing doubts surrounding the future of England striker Wayne Rooney at the Theatre of Dreams.

And the forward that the Scot is lining up to take over from Rooney should the attacker quit the club is Atleti’s prolific marksman, with the Red Devils having sent their scouts over the Spanish capital this month to watch the Brazil-born front man in action first hand ahead of making a possible move for Costa before the winter window slams shut for business for the season once again at the end of the month, says the Daily Mail.