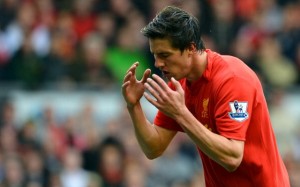 The Aussie should be handed a rare start in this cup tie in order to provide Belgium No 1 Simon Mignolet with a rest ahead of Tuesday night’s huge Merseyside derby in the Premier League at Anfield.

The young England international is in line to deputise for first-choice Glen Johnson after the experienced right back was ruled out indefinitely with an ankle injury.

Veteran Ivorian has struggled badly in recent weeks, although boss Brendan Rodgers has no other alternative but to play the 32-year-old while the likes of Daniel Agger and Mamadou Sakho are both still out injured.

The Slovakia international has been an absolute rock at the heart of the Reds’ back four throughout the entire campaign, and Rodgers would have most certainly taken this opportunity to rest the shaven-headed centre back against Bournemouth had there been adequate cover in place.

On-loan left back from Valencia continues to deputise in the absence of Spaniard Jose Enrique, who is still missing after recovering from a knee operation.