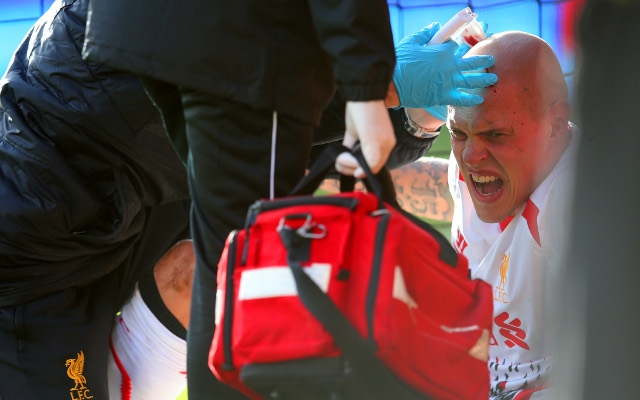 Slovak was forced to undergo lengthy treatment by the side of the pitch.

Liverpool defender Martin Skrtel was forced to live up to his hard-man image during the Merseyside giants’ FA Cup fourth-round tie with Championship outfit Bournemouth at Dean Court on Saturday afternoon, according to reports in the Metro.

The rugged Slovakia international, who is currently enjoying an outstanding campaign at the heart of the Reds back four, was involved in a sickening clash of heads with the home side’s midfielder Andrew Surman in the second half of Liverpool’s 2-0 win.

Both players went up in the penalty box to meet a right-wing centre with their heads, however, as is so often the case, this then resulted in a nasty collision which in turn led to each man lying flat on his back on the turf in apparent agony.

However, in the end it was the visitors’ central defender who seemingly came off far worse than the Bournemouth player and while play continued in the closely fought cup tie, the Reds’ medical team worked furiously on Skrtel behind the goal.

And after a five-minute interval, the shaven-headed 29-year-old then returned to the fray sporting a large bandage to protect the damaged area which had needed a number of staples to be inserted in order to stop the bleeding.