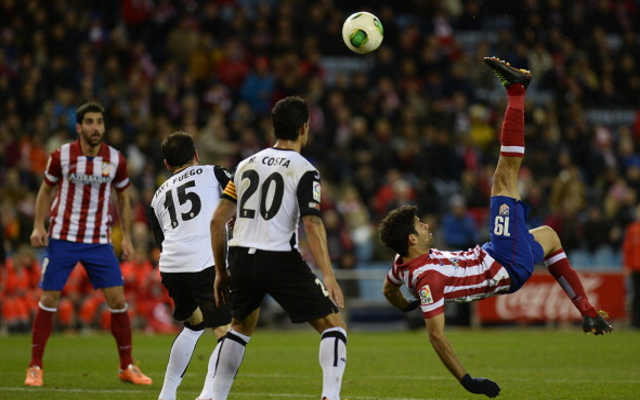 Chelsea are to launch a £30m deadline-day bid for Atletico Madrid striker Diego Costa according to the Metro.

Jose Mourinho is seemingly keen on bringing in much needed striking reinforcements with his current crop of forwards failing to score with any semblance of regularity, Samuel Eto’o’s hat-trick against Man United aside, and the Blues boss will apparently make a big money offer for in-form La Liga goal machine Costa.

The Stamford Bridge side are ready to offer either Thibaut Courtois, who is into his third season on loan at the Vicente Calderon, or Demba Ba in part exchange as Mourinho looks to persuade Diego Simeone to sell his most effective attacking weapon.

Costa has scored 19 goals in 21 La Liga fixtures to help Atletico Madrid to mount a genuine domestic title challenge and has also scored four goals in the Champions League.

Given that Atletico Madrid are still competing in the Champions League it seems unlikely 25 year old Brazilian born marksman Costa would look to force a move to West London and a summer move does seem far more likely.

However having seen his side fail to break down West Ham, and having to depend a great deal on his creative midfielders to shoulder the goal-scoring burden, one can see why Jose Mourinho would eagerly pursue Costa.