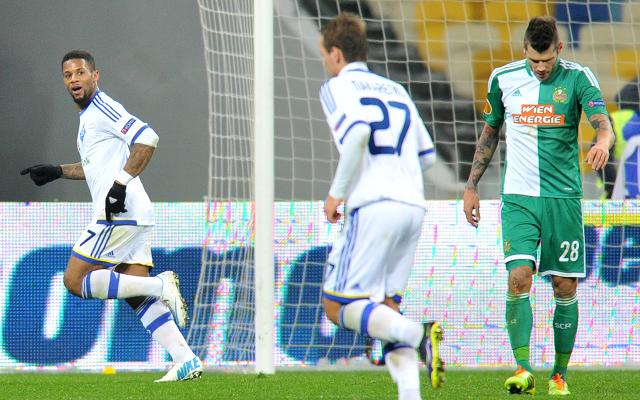 Gunners keen on bringing in striker on loan.

Arsenal are set to make a late attempt to land Dynamo Kiev forward Jeremain Lens on loan for the remainder of the season with an option to buy over the summer.

CaughtOffside understands that Arsene Wenger had the player secretly scouted just before the Christmas period and was impressed by what he saw, and will now look to make a quick bid to bring the player on board before the transfer deadline.

However, with the 26-year-old only linking up with the Ukrainians over the summer in a big money move from PSV Eindhoven, the Gunners are going to have to cough up a considerable amount at the end of the season to buy him out of the rest of his four year deal.

The Gunners are still on the lookout for a striker to help ease the goalscoring burden on Olivier Giroud and with Wenger reportedly not keen on snapping up Mirko Vucinic from Juventus he has turned his attentions toward the Dutchman.

Lens can also operate on the wing as well as up front, and with the recent injury to Theo Walcott ruling him out for the rest of the season  the Kiev player’s versatility is thought to have put him at the front of the queue in Wenger’s mind.

Since joining from PSV the player managed to bag himself four goals in 19 appearances, most of which came on the wing, and though the club aren’t looking to sell they would be willing to allow him out on loan to showcase what he can do in one of Europe’s top leagues before driving up his price in the summer if he manages to make an impression.

Lens is also keen on making the move in order to improve his chances of making into the Dutch national team for this summer’s World Cup. To date he has earned 20 caps, scoring seven goals in the process, but he is apparently worried about falling behind in the pecking order.

Currently valued at just over £7m, the Ukrainians are believed to want something in the region of £9m should they eventually decide to sell, with additional add ons if he performs well during his time in London.

Wenger is said to be very keen to work with Lens, and should he fail to strike a loan deal before the window closes he will go back again with a permanent offer over the summer.